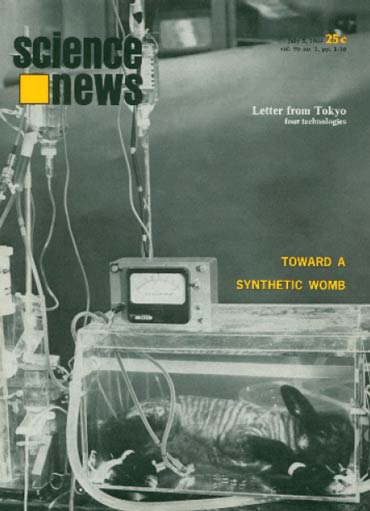 An artificial womb has been used to keep some 35 fetal lambs alive for up to 55 hours … researchers [still] have to show that a fetus can actually grow, not just survive, in their man-made womb…. Eventually, it might be possible to place extremely premature infants into such a womb … to support them until they can survive on their own. — Science News, July 5, 1969

Artificial wombs that bring preemie babies to term could help save thousands of babies born before 28 weeks in the United States each year. In 2017, researchers reported tests on a different kind of womb device on premature lambs. Unlike scientists in the 1960s, who submerged lambs in synthetic amniotic fluid in a fish tank–style setup, the recent group placed lambs in fluid-filled bags, sealed to reduce the risk of infection (SN: 5/27/17, p. 6). Those lambs developed normally during the four-week experiment. That was far better than the average 40 hours the lambs in the ’60s survived before succumbing to infection. Scientists hope to make such technology ready for humans within a few years.