Trade routes connected Egypt and Mesopotamia with Denmark by 3,400 years ago and remained active until at least 3,100 years ago, say archaeologist Jeanette Varberg of Moesgaard Museum in Højbjerg, Denmark, and her colleagues. Chemical analyses of blue beads previously found in Danish Bronze Age graves from that period show that the ornaments originated in glass workshops of Egypt’s pharaohs and Fertile Crescent rulers, the researchers report December 13 in the Journal of Archaeological Science.

“This is the first evidence of ancient Egyptian glass outside the Mediterranean region,” Varberg says. Mesopotamian glass was previously known to have reached as far north as France, she adds.

Egyptian and Mesopotamian glass beads probably reached societies more than 5,000 kilometers away in southern Scandinavia after passing through extensive sea- and land-based trading networks, says Boston University archaeologist Kathryn Bard, who did not participate in the new study. 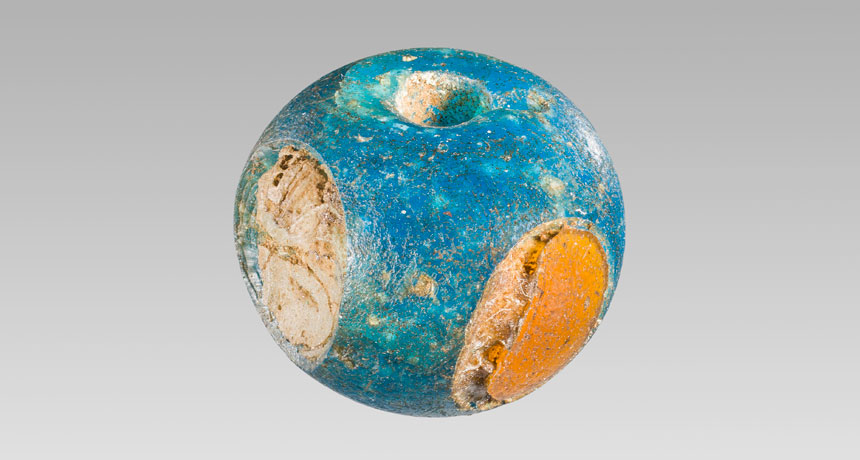 A chemical analysis pinpoints Mesopotamia as the source of this glass bead, featuring inlaid eyes of yellow and white glass. The bead was discovered in a 3,400-year-old Danish grave.

Northern Europeans swapped amber for high-end glass objects, Varberg’s group proposes. It’s already known that Baltic amber, mined along the coasts of Denmark and nearby countries, reached Central European and Mediterranean sites more than 3,000 years ago. Baltic amber was used for  a lion-shaped cup from that time previously discovered in Syria and for beads and scarabs found in Egyptian King Tutankhamen’s tomb, Varberg says.

In addition, a roughly 3,300-year-old shipwreck discovered off the Turkish coast in 1982 included Baltic amber beads and glass items among its cargo of luxury items, indicating that these goods traveled along common trade routes.

Bright blue glass beads such as those from the ancient Danish graves “make perfect sense” as items that could have been exchanged for Baltic amber, comments archaeometallurgist Thilo Rehren, who directs a campus of University College London in Doha, Qatar. “These new results demonstrate that the globalization of trade is not a modern invention.”

Varberg’s team analyzed 23 glass beads from 10 Danish Bronze Age graves that are held at the National Museum of Denmark in Copenhagen. Chemical signatures were obtained by blasting microscopic craters on beads’ surfaces with a tiny laser beam, enabling another device to identify the material’s molecular structure. Results were compared with chemical signatures of 10 ancient Egyptian glass fragments, also studied by Varberg’s team, and of Mesopotamian glass items previously assessed with the laser technique by other researchers.

Two Danish beads were made of Egyptian cobalt-blue glass. Cobalt in these finds contained concentrations of nickel, zinc and manganese typical of cobalt-colored glass items and fragments found at several ancient Egyptian workshops. One of the two beads came from the approximately 3,400-year-old grave of a woman who lay among an array of bronze ornaments. The glass bead and two amber beads were found next to the woman’s upper right arm. The other Egyptian bead also came from a woman’s grave.

Remaining beads displayed characteristics of Mesopotamian glass, including a relatively high concentration of copper and blue cobalt consisting of a distinctive blend of nickel, zinc and manganese. Most Mesopotamian beads also came from women’s graves.

Many Bronze Age graves in Europe contain both amber and glass objects. The new evidence raises the possibility that ancient Egyptian religious beliefs — in particular, regarding the color yellow (seen in amber) as a sign of the sun’s power, and the color blue (featured in glass beads) as symbolizing the sea that created the sun and life — influenced people in southern Scandinavia, Varberg speculates.