Florida police are searching for a man who lurks in the shadows.

For more than two years, he has terrorized at least a dozen women, peeping into windows and slipping into bedrooms to watch them sleep. He has touched several women’s feet or hair — some, he has sexually assaulted.

The media dubbed him the “Serial Creeper,” and police are desperate to find him. In September, they released a sketch of a dark-haired, dark-eyed Latino man with smooth skin, high cheekbones and a pointed chin. But the sketch wasn’t drawn by a police artist based on eyewitness accounts. The Creeper has kept his face covered in every assault, says Kelly Denham, a police officer in Coral Gables, Fla. “He’s never been seen.”

So local police had to pursue a less-conventional route: They bought a computer-generated image based on the Creeper’s DNA.

For $4,500, a company based in Reston, Va., called Parabon NanoLabs analyzed DNA that the Creeper left behind at crime scenes. The analysis zeroed in on genetic clues linked to hair color, eye color, facial features and ancestry. Then, Parabon crafted a digital mash-up of the Creeper’s face.

The images Parabon creates don’t offer an exact picture of a suspect, says Ellen Greytak, Parabon’s bioinformatics director. “We work with law enforcement to give them an idea of who they should be looking for,” she says — or which people to cross off the suspect list.

In the last few years, several scientists and companies have ventured into the new world of appearance prediction. It’s a hazy place, where the roots of a person’s looks hide out in their genetic instruction books. Scientists dig up these roots by linking people’s physical features with tiny landmarks in their DNA. If investigators could use DNA to predict nose width, say, or eye size, they might have an easier time tracking down criminals.

Proponents say the technology can do more than give investigators a lead in a case. It could also help put a face to ancient people — long-lost ancestors, or perhaps even Neandertals. Some even imagine giving parents-to-be a glimpse at their unborn child’s visage, though that’s still a far-off dream.

In truth, the science for conjuring a person’s appearance from DNA remains a little skimpy. Facial features may be shaped by hundreds or thousands of genes — each with very tiny effects.

And scientists have only just begun to sort it all out. Hair, eye and skin color, as well as ethnic background, are relatively easy to pin down. But the genetic roots of other traits, such as height and face shape, are scattered throughout people’s DNA like dandelion seeds in the wind. It’s hard to track down every wispy speck. That’s why some researchers think current prediction attempts aren’t ready for prime time.

Some attempts rely mostly on genetic information about sex and ancestry (whether a person is male and of European descent, for example) to construct an image of someone’s face, says Manfred Kayser, a geneticist at Erasmus University Medical Center in Rotterdam, the Netherlands. And that, he says, “is not much more accurate than using your imagination.”

The face of a king

Until recently, the face of one of England’s most notorious kings was left to artists’ imaginations.

Known for his twisted spine and villainous ways, King Richard III probably had brown hair and dark eyes. Or maybe light hair and blue eyes — portraits painted after his death varied. But now, DNA has given scientists a better picture.

In 2012, more than 500 years after Richard was cut down in battle, archaeologists dug up the monarch’s yellowed skeleton under a parking lot in England (SN: 3/9/13, p. 14). Analyses of dozens of genetic clues from the DNA in his ancient bones finally offered solid details about Richard’s appearance, Kayser and colleagues reported last year in Nature Communications (SN Online: 12/2/14).

“Quite certainly he had blue eyes,” Kayser says. “And it’s very likely that he was blond as a kid and either blond or light brown as an adult.”

Kayser and colleagues knew what to look for because they and other scientists have tracked down genes controlling hair and eye color. The researchers first had to scan the genetic instruction books of thousands of people.

Each person’s instruction book, or genome, holds 3 billion chemical base pairs, DNA “letters” that spell out the plans for everything from sex to skin color. Most of those letters don’t vary much from person to person. But scientists can use slight changes in the text, one-letter differences called single nucleotide polymorphisms, to predict certain physical features.

Kayser’s team can, for example, deduce a person’s eye color by looking at just six letters spread out over six genes. To figure out hair color, the researchers focus on 22 letters. For blue or brown eyes, the team’s predictions are more than 90 percent accurate. Hair color is almost as good, with accuracies ranging from about 80 to more than 90 percent — pointing out a redhead is the easiest.

The team has used its system, called HIrisPlex, on DNA from King Richard’s bones. The system has crime-fighting appeal as well. It can pick out a person’s hair and eye color from blood, semen and saliva — even when DNA in the samples has broken down, the researchers reported last year in Forensic Science International: Genetics. That’s a big deal because forensic DNA can get shabby. If samples sit around too long at crime scenes, DNA can fall to pieces, becoming hard to analyze.

With hair and eye color in hand, Kayser’s team has now added skin color to its system, the team reported in September at the International Society for Forensic Genetics meeting in Krakow, Poland. Preliminary results suggest that the skin-color test is about as accurate as the tests for eye and hair color.

Clues about coloring are a good start for estimating appearance, but prediction tools are still rough around the edges. Eye colors other than blue and brown are difficult to predict, and DNA can’t distinguish between blond adults and brunet adults who were blond as children, for example. 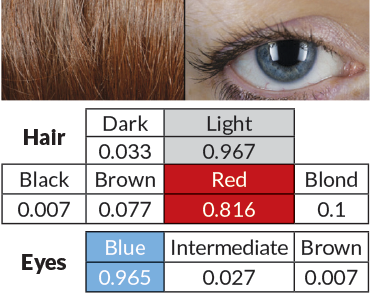 Still, those traits, along with ancestry, are the easy ones, the low-hanging fruit, says geneticist Peter Visscher of the University of Queensland in Australia. Other features can be much harder for scientists to grab onto. Height and face shape, for example, are still mostly out of reach.

If not for a scoliosis-curved spine, King Richard would have stood about 5 feet, 8 inches tall.

Scientists calculated this number from the length of his thighbone. Using his DNA probably would have gotten them only somewhere in the ballpark.

“For any individual, your best guess might be correct — but it might be off by two or three inches,” Visscher says.

When it comes to predicting traits from DNA, two main factors come into play, he says. The first is how much genes, versus environment, influence a certain trait. (For some traits, like body weight, environment plays a big role.) The second is how many genes are involved. If lots of genes affect nose shape, for example, each gene’s individual contribution may be tiny and hard to suss out.

The number of genes influencing height could be huge — probably in the thousands, Visscher says. For height more than any other complex trait, scientists have made a Herculean effort. Last year, Visscher and more than 400 colleagues pulled together data from 79 studies that scanned the genomes of more than 250,000 people. The analysis uncovered about 10,000 DNA letters linked to height sprinkled throughout the genome, the researchers reported in Nature Genetics.

But even all that information isn’t enough for researchers to pin down a person’s height using  just his or her DNA. And if scientists can’t predict a well-studied trait like height, there’s even less hope for other, more obscure traits, like mouth size or distance between the eyes.

In five to 10 years, Visscher says, with more data from more people, scientists might be able to say whether a person is much taller or shorter than average. But now, predicting height from DNA “is not good enough to be particularly helpful,” he says. “My guess is that it’s probably even worse for facial features.”

Show me the data

A person can change the look of his or her face with a little makeup or a new haircut. But the underlying architecture — the length of the nose, the size of the ears — comes mostly from mom and dad.

Scientists know that the blueprints for people’s features lie in their genes, Kayser says, but they have “an embryonic understanding of where in the genes.” He has been part of recent attempts to flesh out the links between DNA and appearance.

In 2012, Kayser and colleagues used DNA and 2-D or 3-D images of nearly 10,000 participants to pick out five genes that influence face shape. One of those genes, PAX3, seems to tweak the bridge of the nose; that gene was also identified by other researchers earlier that year. Those findings are a great start, says Benedikt Hallgrimsson, an evolutionary biologist at the University of Calgary in Canada. But overall, “we still don’t know very much about the genetics of the shape of the face.”

Tiny differences in a person’s DNA, known as single nucleotide polymorphisms, or SNPs, can help predict physical features. Some traits are easier to predict than others.

Some of the data Parabon uses in its analyses come from Shriver’s collection efforts, but even Shriver isn’t convinced that face-predicting technology is ready for the mainstream. Hallgrimsson agrees: “My worry is that they’re going into this too soon on too shaky a foundation of science.”

Parabon hasn’t yet published a study that tests its predictions’ accuracy, but several law enforcement agencies have checked it out, says bioinformatics director Greytak. Sometimes agencies give the company a test drive, and send out a few DNA samples before buying the product. The agencies then compare photographs with Parabon’s predictions. “We’ve nailed every single one of those,” Greytak says, though the agencies haven’t made test results public.

Parabon’s predictions consider genetic information about sex, ancestry and facial characteristics from databases that include about 15,000 people. Still, Greytak says, “we need a lot more data. That’s the big thing.” If you want to capture the variation of human faces, she says, you need to know what a wide variety of faces look like relative to their genetics.

Greytak acknowledges that Parabon’s technology can’t identify individuals, like a photograph can. But the technology is “absolutely ready from the point of view of exclusion,” she says. Investigators can use the images to rule out suspects. So in the search for the Serial Creeper, for example, police could eliminate suspects with red hair and blue eyes.

For the Creeper, who hasn’t been linked to a crime since August, the profile gave stumped investigators a new avenue to explore. “We’re at a standstill in the investigation — that’s why we turned to the Parabon DNA profile,” Denham says. “Let’s see what we can come up with to try and find this guy.”

This article appears in the December 12, 2015, issue of Science News with the headline, “What’s in a face?”