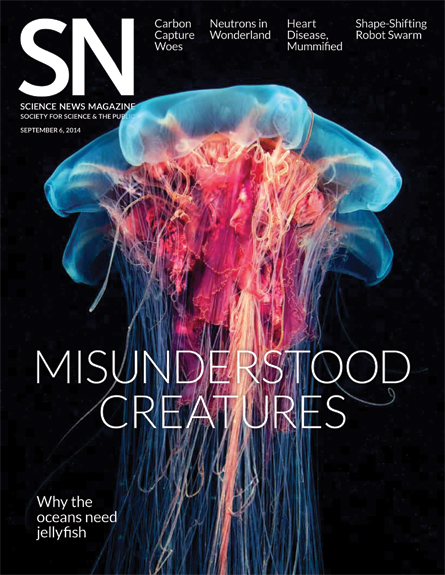 In defense of jellies

Jellyfish may not be as lovable as some other animals, but they do more for their ecosystems than most people realize. Susan Milius explained that gelatinous creatures provide food for some ocean dwellers, homes for others and more in “Seeing past the jellyfish sting” (SN: 9/6/14, p. 16).

Scientists wrote in to show support for often-maligned jellyfish. Evolu-tionary biologist Casey Dunn of Brown University in Providence, R.I., has frequently been frustrated by what he calls “Jellies are scary” articles, which treat gelatinous animals as a sign of unhealthy ecosystems. “Your article shows that there is no reason to resort to fear tactics to get people engaged and interested in these incredible animals. Their beauty and unique biology are far more compelling,” he wrote. “This is refreshing, and provides a much better framework for informing the readers.”

New research on mummies from around the world shows that heart disease is an ancient affliction. What caught readers’ attention in Tina Hesman Saey’s story (SN: 9/6/14, p. 6), however, was a photo of a mummy prepped for a CT scan. 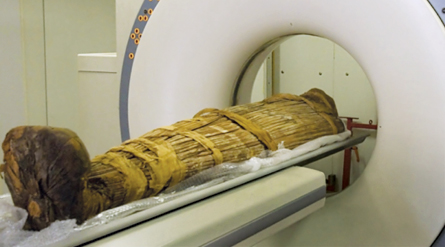 “It’s amazing how long it takes to get a CT scan these days. Must have had an HMO.”

“Thank goodness for expanded health care coverage or he would need all those treasures for the copay.”

“I think this patient is beyond saving.”

Neurologist Oliver Sacks, who has written eloquent books about human nervous systems, e-mailed to express his appreciation of gelatinous ones. “Until the latter part of the 19th century, it was assumed that jellyfish (of all kinds) were simply passive masses of jelly, but in 1880, Darwin’s young friend George Romanes was able to demonstrate that jellyfish had quite complex nervous systems, with upwards of 1,000 nerve cells.” Now biologists recognize that box jellyfish have nerve ganglia and even eyes with retinas and lenses. Comb jellies, with well-developed sensory cells and rapidly reacting ion channels, may be the most ancient surviving branch on the animal genealogical tree, the sister lineage to all other animals. “It is pleasing to think that these beautiful, misunderstood creatures are our ancestors, and have been around for nearly 600 million years,” Sacks wrote.

No guessing in goalkeeping

In an online comment, Jared argued that goalie-kicker dynamics aren’t that simple. “The researchers assume that goalies are guessing because of a pattern from kicker to kicker. This is rarely the case,” he wrote. “Most goalies attempt to read, not guess, where a shooter is going just before the ball is kicked. Sometimes this is done consciously and other times subconsciously. Of course, then shooters can deceive goalies with false cues. These duels are far more about game and chaos theory than about lucky guessing.”

Anton Szautneragreed, adding that the skill and experience of the goalie also comes into play. “There is a significant success rate amongst good goalkeepers who do anticipate which way a shooter is likely to send the ball, based on their observation of body language, face and direction of gaze.”

In “Stars’ tilted disks clarify odd orbits” (SN: 9/6/14, p. 10), Christopher Crockett described the misaligned disks of gas and dust circling a pair of nearby stars. The cockeyed duo may provide insight into the peculiar orbits of some exoplanets.

Online commenter Inquisitive observed that the odd exoplanets may have something in common with a planet closer to home: “Our planet also shows a tilt in its orbit around the sun.”

That’s true, Crockett says. “While the planets’ orbits line up pretty closely with each other, the entire solar system is tilted by about 7 degrees relative to the sun’s equator. Caltech astronomer Konstantin Batygin says that, although there are several plausible ideas about what caused that tilt, it could be a hint that our sun once had a star companion that has since drifted away. Pretty remarkable!”