Breathing at sea level may be hazardous to your health, a new study hints. The research compared cancer rates for people at living at various elevations and found that lung cancer rates are lower at high elevations where the air is thinner.

If every person in the United States lived at elevations above 3,400 meters, such as atop Mount Hood in Oregon, there would be 65,496 fewer cases of lung cancer each year, researchers Kamen Simeonov and Daniel Himmelstein estimate. (In 2014, an estimated 224,210 new cases of lung cancer were expected to be diagnosed in the United States.) The findings could mean that lung cancer is linked to altitude — more specifically to the amount of oxygen in the air, the researchers report January 13 in PeerJ. Other cancers included in the study weren’t linked to altitude.

Simeonov and Himmelstein are not the first to note the health benefits of high-altitude living, says Paul Hwang, a physician and scientist at the National Heart, Lung and Blood Institute in Bethesda, Md. Hwang and colleagues have demonstrated that reducing oxygen levels could prolong the lives of mice prone to cancer. Oxygen can form molecules that damage cells and lead to cancer.

The finding presents a conundrum, though, because people must breathe oxygen to live. “Life is hazardous,” Hwang quips.

The study is “quite provocative,” says cancer epidemiologist Elizabeth Platz of Johns Hopkins Bloomberg School of Public Health, but it is a clever analysis of publicly available data. However, anyone hoping to avoid lung cancer would do far better to not smoke than to pack their bags and move to the mountains, she says.

Simeonov, now a medical and graduate student at the University of Pennsylvania, got the idea that elevation might be linked to lung cancer when he noticed that people in Austria have some of the highest smoking rates in Europe, but relatively low lung cancer rates. He discussed the hypothesis with his roommate, Himmelstein, who is now a bioinformatics graduate student at the University of California, San Francisco.

In their spare time, the two researchers gathered and analyzed information from government databases, focusing their attention on 260 counties in the western United States. Those locations vary in elevation from Imperial County, Calif., at 11 meters below sea level, to San Juan County, Colo., at 3,473 meters above sea level. As elevation increases from the lowest county to the highest, the concentration of oxygen in the atmosphere drops by 34.9 percent. 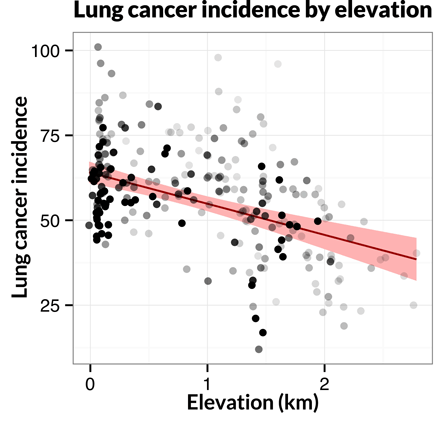 For every kilometer of altitude gained, lung cancer incidence dropped by about 12.7 percent, the researchers found. The rates of non-respiratory cancers such as breast, prostate and colorectal cancers did not show a link to elevation.

Simeonov and Himmelstein took into account factors, some of which have been linked to cancer, that accompany elevation — radon levels, climate changes and exposure to ultraviolet light and fine particle pollution. But none of those factors could explain the drop in lung cancer rates as well as elevation did, the researchers say.

The most likely culprit for the elevation and cancer link is oxygen, they say. However, studies such as this one can only suggest relationships between environmental factors and health. “We can’t say that it’s oxygen” for sure, says Simeonov. All that the researchers can determine is that increasing elevation seems to protect against getting lung cancer. “This is an interesting observation and an interesting finding that needs to be explored mechanistically,” Simeonov says. “We’re not suggesting that everyone should be moving” to higher altitudes.

Hwang says he was a “little surprised” that just lung cancer was related to altitude. That link makes sense because the lungs are directly exposed to atmospheric oxygen. But internal organs are also constantly bathed in oxygen-rich blood in which the oxygen concentration is directly related to the levels in the outside air. Each type of cancer may react differently to the effects of high oxygen levels, Hwang says.

Paradoxically, previous research has shown that low oxygen concentrations can spur cancer growth, Hwang points out. The contradiction might be resolved by considering how cancer gets started. Hwang thinks that low oxygen levels may prevent DNA damage that initiates a tumor. But once a tumor starts to grow, oxygen starvation may fuel its growth.

Like all epidemiological studies, this one suffers from the caveat that the connection could be coincidental, Platz says. The researchers need data on the diet, lifestyle, smoking habits and health of individuals to make the link tighter. “I’m not saying they are wrong,” Platz says. “I’m just saying they can’t rule out those other confounding factors.”