Climate science is among the few winners in President Barack Obama’s budget request for fiscal year 2015, which generally keeps research funding static. But even the modest increases the administration has proposed for climate research are likely to face strong opposition in coming months from the members of Congress who are resistant to new spending and skeptical of global warming.

The $3.9 trillion budget released on March 4 offered funding agencies like the National Science Foundation and the National Institutes of Health mostly flat budget numbers, while other agencies such as the Environmental Protection Agency saw overall cuts (See table).

“The President’s FY15 budget does disappointingly little to close the nation’s innovation deficit,” the Association of American Universities, which advocates for science funding, said in a statement.

Nevertheless, a few agencies would see a modest rise for climate science, in line with the Climate Action Plan that the White House unveiled in June. “Climate change is no longer a distant threat,” the administration declared, outlining a comprehensive strategy that shifts policy from focusing on tallying the effects of climate change to finding ways to curb those effects. But even the request for a small bump in funding to combat climate change is expected to face strong opposition as it moves through both chambers of Congress in the coming months. 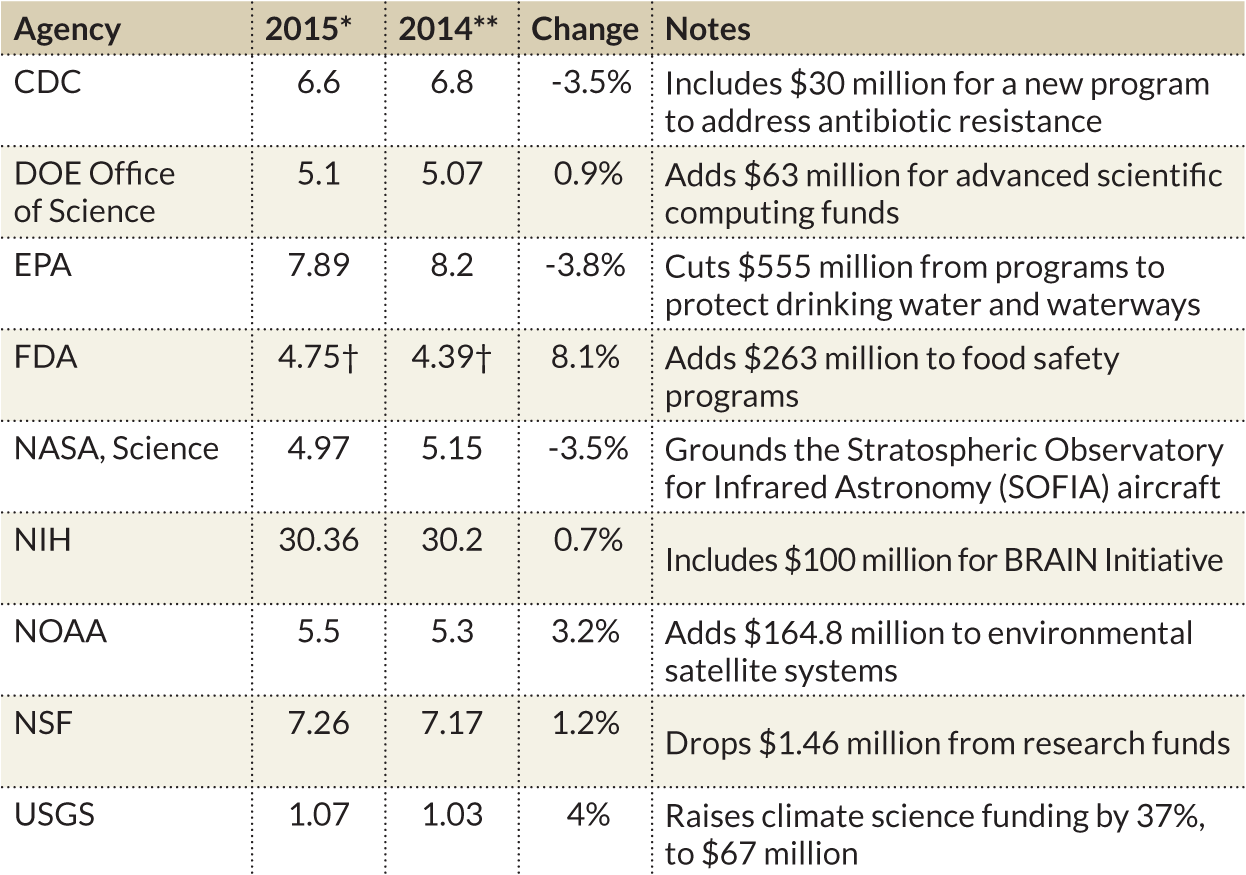 The president’s 2015 financial plan allots $2.2 billion, a $164.8 million increase from 2014, to maintain and expand National Oceanic and Atmospheric Administration satellite systems that monitor weather and environmental conditions. The polar orbiting environmental satellites, for instance, are six spacecraft that record data on sea-surface and atmospheric temperatures. Scientists plug such data into global climate simulations that can then be used to project and anticipate regional-scale changes.

The EPA, which overall would lose nearly $310 million compared with the enacted 2014 budget, would still see a $41 million boost for climate change and air-quality research, for a total of $1.03 billion. The extra cash will help the agency find ways to make vehicles meet emissions standards and develop caps on allowable carbon dioxide pollution from power plants. Two million dollars will go to technical assistance, such as helping water utilities prepare for extreme weather events like storm surges.

For the U.S. Geological Survey, the president’s budget packed an extra $18.2 million — a 37 percent increase — for a program devoted to climate change science, totaling $67.6 million. “We’re happy to see these proposed increases,” says Matthew Larsen, associate director of the USGS Climate and Land Use Change division. “We know that we could put them to good use.”

So far, the agency’s efforts to address climate change have focused on analyzing satellite data, tracking the country’s stored carbon and setting up eight regional centers that translate the projections of global climate simulations into landscape-scale effects. More than half of the extra $18 million will fund these climate centers. Analyses from these regional hubs move the country beyond studying how climate is changing to researching ways to mitigate adverse effects, Larsen says.

Merging climate science into land management is a new and much-needed research area, says ecologist Andrew Hansen of Montana State University in Bozeman. Along with three other labs, Hansen won a $340,000 grant from the USGS North Central Climate Science Center in 2013 to help prepare Yellowstone National Park for climate change.

Picking apart global climate models to find how temperatures will change in specific areas of the park, Hansen’s team is helping park managers decide where to plant new trees to dodge the mountain pine beetle. Thanks to a stretch of mild winters, a boom of the bugs has ravaged the park’s forests. “The North Central Climate Science Center is really helping to develop tools and approaches,” Hansen says.

“This is the way we need to move,” says climate researcher Christopher Castro of the University of Arizona in Tucson. “We’ve accepted the existence of the problem. Now, what do we need to do?” With a nearly $173,000 grant from the USGS Southwest Climate Science Center, Castro and colleagues are using dynamic climate simulations to understand how the Colorado River basin’s waterways — a source of drinking water throughout the Southwest — will change in coming decades. The region has seen severe drought in the last decade, Castro says, causing local agencies to rethink how they manage water. New management strategies include letting treated wastewater soak back into the ground to replenish subterranean water stores.

“I think it’s great that this is a priority in the president’s proposed budget,” Castro says of the emphasis on climate change science. “But I would suspect that there would be a lot of resistance in Congress.” Indeed, the EPA has already gotten a taste of the reaction to the president’s request to bolster climate science funding.

In addition to the EPA’s $41 million increase for addressing climate change and air quality, the president requested the agency receive $10 million to help set limits on carbon emissions from power plants, a key goal of the president’s Climate Action Plan.

“Power plants are the single largest source of carbon pollution in the United States, accounting for roughly one-third of all domestic greenhouse gas emissions,” Janet McCabe, acting assistant administrator for the EPA’s Office of Air and Radiation, testified at a hearing of the House Committee on Science, Space, and Technology.

The March 12 hearing aimed to review the science behind the EPA’s September 2013 proposal to cap how much carbon dioxide new power plants can emit.

Still, during the hearing, the committee’s vice chair, Rep. Dana Rohrabacher, R-Calif., declared that he does not believe climate change is real. And committee member Rep. Randy Weber, R-Texas, referred to global warming as a “religion.”

Editor’s Note: This story was updated March 18, 2014, to correct the number of research groups that shared a grant with Andrew Hansen.