Directions: After students have had a chance to review the article “Built for speed,” lead a classroom discussion based on the questions that follow. You can copy and paste only the questions that apply to your classroom into a different document for your students. As an introduction to catalysts, and to get your students’ attention, consider performing the well-known “elephant toothpaste” demonstration. This activity can lead off a general discuss of catalysts by showing students the rate of decomposition of hydrogen peroxide with and without a catalyst. Suggested links with demonstration instructions and materials are listed below. Please note that appropriate safety precautions should be used when handling hydrogen peroxide.

1. What is a catalyst? What are some examples of common catalysts? [A catalyst is a substance that helps a chemical reaction happen at a faster rate, but it is not used up by that reaction. The same catalyst can go on to help more reactions. Common examples of catalysts include: Platinum in automobile catalytic converters, which convert unburned gasoline into carbon dioxide. Iodide catalyzes the decomposition of hydrogen peroxide to create water and oxygen gas.]

2. What precious metals are effective catalysts? Where are these metals located on the periodic table, and based on their location, how are they similar? [Platinum, palladium, iridium, ruthenium and gold are effective metal catalysts. These metals are inert, or unreactive, in many systems and therefore won’t be used up in side reactions unrelated to the reaction they are supposed to catalyze. All of these metals are located in the d-block of the periodic table and are considered transition metals. Based on this similarity, they should have similar reactivity.]

1. Refer to the diagram on Page 22 of “Built for speed” titled “Carbon and then some” to answer the following questions: What is graphene and what is it composed of? What types of chemical bonds does it contain, and what is the bond hybridization? [Graphene is a single sheet of graphite. It is composed of one layer of carbon atoms bonded covalently in a repeating hexagonal shape. All of the interior carbon atoms in graphene are sp2 hybridized.] 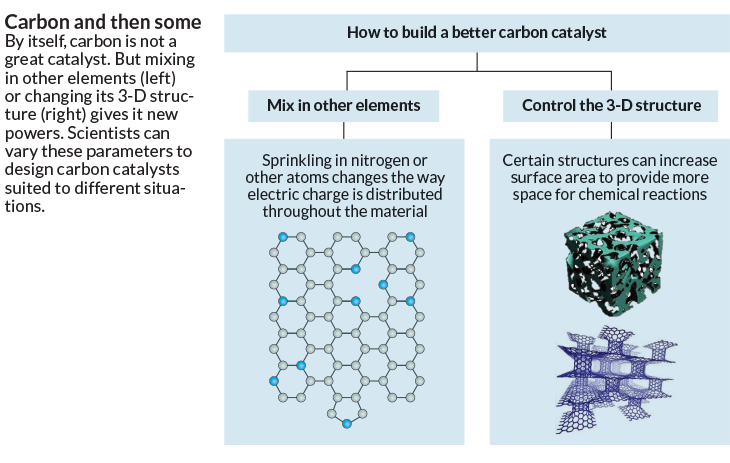 2. What elements are used to enhance, or dope, carbon structures such as graphene to make potentially viable catalysts? Why do these particular elements create a more catalytically active carbon-based material? [Nitrogen and phosphorus have both been used to replace carbon atoms in graphene, for example. These elements are rich in electrons (have one more valence electron than a carbon atom), therefore they create an unequal charge distribution throughout the material.]

3. What is autocatalysis? [A product of one reaction serves as a catalyst to facilitate more reactions. Examples include neutron-induced chain reactions in fission reactors and conversion of normal proteins to pathogenic prions in mad cow disease.]

1. What is the activation energy of a reaction? [The minimum amount of energy that molecules must have to start a particular reaction.]

2. Refer to the diagram on Page 21 of “Built for speed” titled “A lesser effort” to answer the following questions. How does a catalyst affect the activation energy? On the y-axis, label the reactant energy and product energy. With a vertical line, label the overall energy for both the catalyzed and uncatalyzed reaction curves. What do you notice about this amount of energy? Why does this make sense? [A catalyst lowers the activation energy. The short horizontal line at the beginning of the curve represents the energy of the reactants and the short horizontal line at the end of the curve represent the energy of the products. The overall energy of each reaction is represented by a vertical line connecting the reactant and product energies on the y-axis. This amount of energy is the same for both the catalyzed and uncatalyzed reaction. Catalysts do not change the overall reaction, they just change the pathway of the reaction.]

3. How does a catalyst help a reaction occur at a faster rate? [Getting the molecules to go through the reaction involves getting them over the activation energy hump. When a catalyst is introduced into a system, the activation energy is lowered, which means that a greater percentage of reactants will chemically react in a given amount of time, increasing the rate of the reaction.]

1. What is an enzyme? What kind of molecule is an enzyme? Give examples of biological processes that use enzymes. [An enzyme is a biological molecule that serves as a catalyst to help biochemical reactions. The vast majority of enzymes are proteins, although other types of molecules such as RNA can serve as enzymes for certain reactions. Enzymes can help in processes such as copying genetic material and breaking down food and nutrients.]

2. “Built for speed” states that enzymes “can evolve.” For an organism, what are the advantages of having evolvable catalysts? [Catalysts reduce the amount of energy required to start a reaction, so an organism will expend less energy on a chemical reaction when a catalyst is present. Over time, enzymes can evolve to be more specialized. The more specialized an enzyme is for a reaction, the less likely it is to expend unnecessary effort catalyzing side reactions. Vital reactions supporting an organism’s growth, reproduction and survival would occur more quickly with an effective catalyst.]

3. What is an inhibitor? How does it interact with a catalyst? [An inhibitor is a molecule that can prevent enzyme-substrate interaction or lower an enzyme’s catalytic ability. For example, a competitive inhibitor is a molecule that blocks an enzyme’s active site but does not chemically react the same way as the substrate. Therefore, the inhibitor prevents other substrate molecules from interacting with the catalyst. Many pharmaceutical drugs are inhibitors.]

2. Explain how enzymes are involved in protein synthesis. [Lots of enzymes assemble amino acids one step at a time from more basic building blocks. Then ribosomes—enzymes that are part protein and part RNA — together with other enzymes polymerize individual amino acids to form a protein.]

3. How are enzymes important for cellular respiration? [Numerous enzymes—especially in or near the mitochondria in eukaryotic cells—break down molecules such as sugars containing carbon (C), hydrogen (H) and oxygen (O) one step at a time, and combine them with oxygen (O2) to produce water (H2O), carbon dioxide (CO2) and energy. This energy is stored in the form of adenosine triphosphate, or ATP, and the enzyme ATP synthase is essential for its creation.]

4. How are enzymes important for photosynthesis? [Enzymes involved in photosynthesis—especially in or near the chloroplasts in plant cells—absorb energy from sunlight (using chlorophyll molecules) and use that energy to break up water (H2O) and carbon dioxide (CO2) and combine their components one step at a time to produce sugars (containing C, H and O) and oxygen (O2). Thus photosynthesis is basically respiration running backward, but the enzymes are slightly different.]

1. What practical applications could catalysts be used for? [Fuel cells to produce electricity from chemical reactions; artificial photosynthesis to convert solar energy into stored chemical energy.]

2. What applications outside the ones that occur in the body could enzymes be used for? [Proteases to tenderize your steak; proteases, lipases and other enzymes to remove stains from clothes; enzymes for making cheese.]

1. What research steps would you need to carry out to develop catalysts or enzymes for those applications? [Answers will vary.]

2. Using the information learned from “Built for speed,” design the most effective, cost-efficient shape of platinum catalyst possible. If time and supplies permit, try to build a model of your catalyst. [Answers will vary but should include a design trying to achieve the maximum possible surface area of platinum using the minimum possible mass of platinum.]