1. What was significant about Earth’s surface temperature in 2016?

Possible student response: 2016 was the warmest year on record since record-keeping began in 1880. 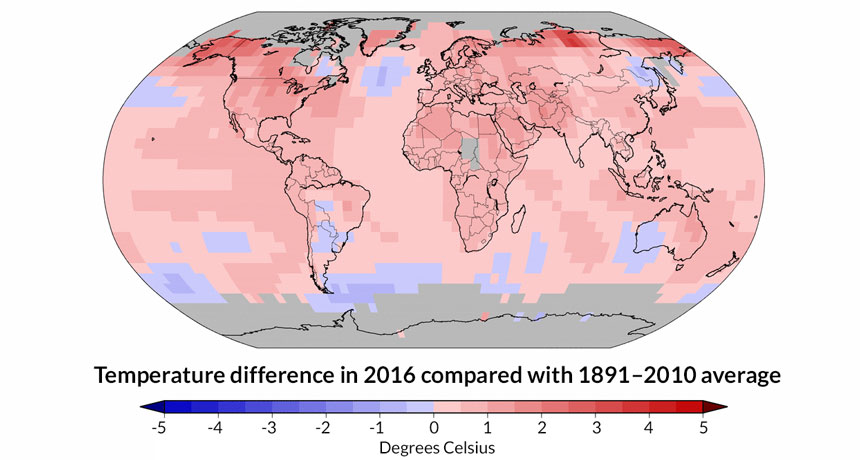 Climate change and remnant warming from the 2015–2016 El Niño helped make 2016 the hottest year on record. Blue areas were cooler than their long-term average temperature; red areas were warmer.

Possible student response: Blue areas indicate places where the average temperature in 2016 was cooler than the long-term average temperature (from 1891 to 2010), and red areas indicate places where the 2016 average was warmer than the long-term average. There appear to be many more red areas than blue areas (a rough estimate might indicate about 90% red and 10% blue—not including the gray area).

Possible student response: Global sea ice extent was at its smallest area in potentially thousands of years, according to data from the National Snow and Ice Data Center and sea ice reconstructions.

5. According to climate scientist Kevin Trenberth, what factors have caused warmer temperatures in 2016?

Possible student response: Human fossil fuel consumption was partly to blame. But one of the three strongest El Niño occurrences on record also raised global temperatures, by releasing heat from the ocean into the atmosphere.

Possible student response: Kevin Trenberth says that “the temperature record is like going up a staircase,” and the 2015 and 2016 temperatures have gone up to the next “step.” While he thinks oscillations around these new high temperatures are likely, he doesn’t think that average global temperature will go back down the stairs to the temperatures of previous years.

7. Give two examples of supporting data from the article’s text that indicate global warming in recent years.

8. Come up with another catchy title for the article that summarizes the content.