FUNGUS BEAUTIFIES SELF WITH FUR-TRIMMED EDGE 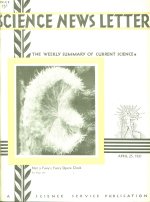 The picture on the front cover of this weeks SCIENCE NEWS LETTER looks like a fur-trimmed opera cloak for Queen Titania of the fairies, but it is nothing more romantic than a rather common small fungus, Schizophyllum commune, that feeds on dead sticks in the woods.

The furry effect is due to the splitting and shredding of the edges of the cap. The photograph, which shows the plant at several times its natural size, is the work of Cornelia Clarke.

Soybeans, 3 million acres of which are raised for cattle food and other agricultural uses in this country, have been recommended to the American Chemical Society as the ideal human food by Dr. A.A. Horvath, now of the U.S. Bureau of Mines, Pittsburgh, but formerly in charge of extensive soybean research at the Peking Union Medical College, China.

Nearly half of the worlds total population uses soybeans daily as a protein food, replacing meat. A hundred generations of Chinese have been raised on this source of protein, and Dr. Horvath called this one of the worlds most extensive biological experiments. Its protein, or meatlike constituent, is extremely well balanced, containing some necessary amino acids that milk and meat do not provide. Forty percent of the soybean is protein, while 20 percent is oil. It contains all the vitamins and counteracts acids within the body.

Dr. Horvath explained that 1 pound of soybeans costing wholesale 2 cents contains as much protein and fat as 2 pounds of beef. A new Austrian process is now being used to remove the beany taste from soybean flour and make it suitable for wider general use.

The mysterious inner core of the atom is probably built on the same lines as the outer shells, that is, like an uneven staircase.

Drs. J.C. Chadwick, J.E.R. Constable, and E.C. Pollard of the University of Cambridge, England, have bombarded a variety of atomic nuclei with fast-moving alpha rays from polonium, a radioactive element. They found that energy is done up in packets, or quantized, in the nucleus as elsewhere in the atom.