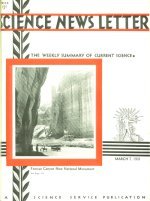 A famous canyon of the West, with ancient Indian ruins under the shelter of its thousand-foot red walls, has been given the status of a National Monument, by an act of Congress recently signed by the President.

This is the Canyon de Chelly in Arizona, with its tributaries, Canyon de Muerte and Monument Canyon. Although Canyon de Chelly is among the most noted of western canyons, relatively few people have seen it as yet, for the roads that lead to it are not good and there are only very limited accommodations. At present the principal object is to get the region under the protection of the National Park Service, which has administrative and police facilities for preventing vandals from looting the historically valuable ruins.

CAN PREDICT MENTAL DISEASE FROM STUDY OF CHILDREN

The development of mental disease can be predicted in advance by psychiatric studies of children, Dr. J. Kasanin and Louise Veo of Boston reported to the annual meeting of the American Orthopsychiatric Association in New York.

“We studied eight children who were examined at the Judge Baker Foundation of Boston because of mild conduct disorders, or were sent there for advice about placement and vocation, and who later on in life became psychotic,” the investigators reported.

Dr. Kasanin pointed out the interesting fact that in the small series of cases studied, the various mental diseases were the developments of special personality types.

Eleven thousand miles per second is the new record “apparent” velocity reported detected in the reddened light from a distant “island universe” viewed through the world’s largest telescope at Mt. Wilson, Calif.

The faint nebula discovered to seemingly recede from earth at this tremendous speed is so far distant that light traveling 6 trillion miles a year would need 120 million years to reach earth.