If you’re a female computer scientist, you may not see an equal number of men and women working in your field in this century — or even the next one. It might take a whopping 280 years for that scientific discipline to bridge the gender gap, researchers report online April 19 in PLOS Biology.

The study predicts when the gender gap will close in science, technology, engineering, math and medicine, or STEMM, fields. Scientists from the University of Melbourne in Australia used a computer program to determine the number of men and women authors listed on more than 10 million academic papers in nearly 5,000 academic journals and about 120 arXiv.org subcategories, published from 2002 to 2016. (Authors with gender-ambiguous names such as Chris or Robin were not included in the analysis, which still preserved 92 percent of the data and didn’t appreciably change the final results.)

This database allowed the researchers to estimate each field’s present-day author gender ratio, its rate of change over time and when gender parity is estimated to occur. The number of women authoring research papers is a reliable predictor of the number of women working in each field, the team writes.

In 87 of the 115 disciplines analyzed, male authors significantly outnumber female authors. Women exceed men in only five fields, including nursing and midwifery. Some fields such as physics, mathematics and chemistry have the fewest number of women authors and would take the longest to reach gender parity. It will take about 131 years to close the gender gap in astrophysics, for example, and about 60 years in mathematics, the researchers estimate.

For many health-related disciplines, the wait could be shorter. For environmental health, the estimate is 16 years. In the public health field, men and women are already represented in roughly equal numbers, the study finds.

To speed closing the gender gap, the authors recommend stronger efforts to recruit and retain women in these fields and providing better access to parental leave.

This graph indicates how many years it will take for the gender gap to disappear in select fields, according to new estimates based on the overall numbers of men and women authoring scientific papers. In one field, public health, the gender gap is already closed, while men outnumber women in most other disciplines. Female-dominated midwifery and nursing (asterisks) are the two exceptions. 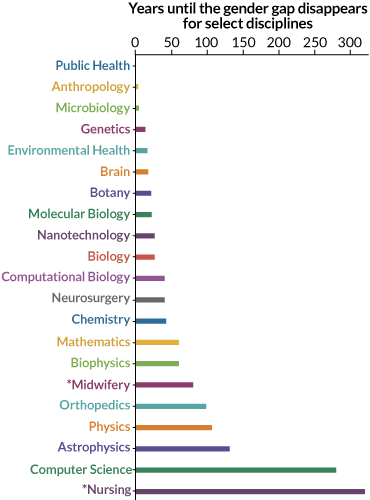