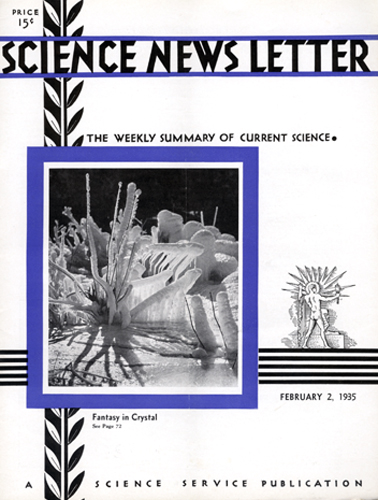 Fairyland loveliness in crystal, rivaling the stalagmites of limestone caverns in fantastic form and gleaming whiteness, are likely to greet our eyes on any morning when winter hesitates between thawing and freezing, and a rain falls that solidifies into ice wherever it strikes a solid object. Not only are trees thus glorified, but also the humblest grasses and the small, wiry shrubs that lift themselves scarcely higher. Evanescent, though, this beauty is: It seems a pity that the sun, whose light is needed to give us the full benefit of this glittering glory, should at the same time be darting arrows of warmth to take it all away.

Scientists can add 10,000 years to the age of man in America. Man-made weapons, buried 18 feet underground, have been unearthed near Austin, Texas, by Prof. J.E. Pearce, anthropologist of the University of Texas, and are hailed as convincing evidence that North America had inhabitants far earlier than archaeologists now concede.

The first discovery was witnessed by Dr. E.H. Sellards, professor of geology at the university, who has studied the geologic formation of the site and pronounces the discovery “highly significant in the early history of man in this part of the world.”

The objects consist of flint dart points and slivers from flint workshops scattered in quantities through various strata of old Brushy River terrace, near Round Rock, Texas. At some levels, old hearths and kitchen refuse have been found.

The significance of the discovery is that the time scale of America’s vague prehistory must be stretched to a great length, like an elastic band. For if the river terrace flints are as old as the geology proclaims them to be, they are still not so old in type as some other Texas relics of man. Hence, the older relics must be given a new status, as having a much greater antiquity than has heretofore been assigned them.

A new system of direct current electric-power transmission that may overthrow present alternating current methods was presented before the New York meeting of the American Institute of Electrical Engineers.

The new system, described by B.D. Bedford and Dr. F.R. Elder of the General Electric Co. and Prof. C.H. Willis of Princeton University, has possible ramifications—although not mentioned officially at the meeting—in the field of government generation and transmission of power such as the Tennessee Valley Authority and the use of great direct current generators as are foreshadowed by the 10-million-volt apparatus of Prof. Robert Van de Graaff of the Massachusetts Institute of Technology.