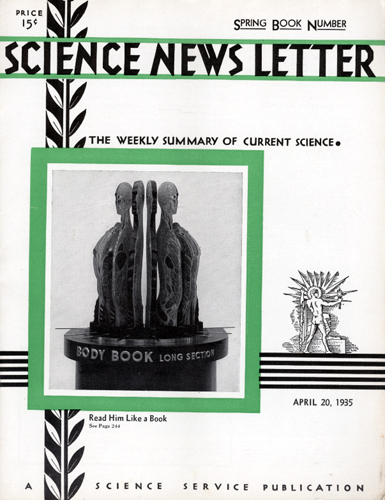 “Reading him like a book” becomes more than a figure of speech to the visitor of the new Cabana Hall of Man at the Buffalo Museum of Science, recently opened to the public. One of the most striking of the exhibits consists of two anatomical models split into a series of thin sections that can be separated, book-fashion, permitting the student to “look at his own insides,” not merely along one plane but at any place he wishes, either from right to left or from head downward.

The entire hall is devoted to the anatomist’s and physiologist’s task of showing how the human body works and how it may best be guarded against malfunction and disease. The central exhibit is a replica of the “Transparent Man,” of Century of Progress fame. There are other exhibits showing the pumping action of the heart, the production of voice sounds, the course of blood corpuscles, etc. One of the most ingenious is an electrically driven human skeleton.

“Brain waves” tapped electrically are providing a new clue to the mystery of epilepsy, the first fresh lead to this disease problem that scientists have had in a long time.

Drs. F.A. Gibbs, H. Davis, and E.L. Garceau of Harvard Medical School reported to the American Physiological Society that an electrical hook-up to the brain producing wavy lines traced on paper gives a new clue to what goes wrong in this malady.

They find by this means that epilepsy is probably a neurological storm that results in great piling up of electrical discharges.

The discovery of a hitherto unknown protein material in food absolutely essential to growth and life was announced by Dr. William C. Rose of the University of Illinois to the Federation of American Societies of Experimental Biology.

It is No. 22 in the list of the known amino acids in the proteins of the body and No. 8 in the list of those that have been shown to be necessary to life. Scientifically, its name is Alpha-amino-beta-hydroxybutyric.