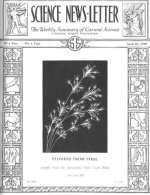 The same fascinating sparks that the village children used to watch “flying like chaff from a threshing floor” are now used to save industry thousands of dollars, for they have been found to be an index to the many kinds of modern steels, which differ from one another only slightly in carbon or alloy content.

When held against a flying grindstone, a steel containing only 15 hundredths of 1 percent carbon gives a shower of slender spearlike sparks, while a 1 percent carbon steel yields a much fuller shower with many small branches, remindful of a bunch of flowers of pure white stems, leaves, and blossoms. Similarly the different alloy elements, such as molybdenum, nickel, and chromium, leave a characteristic impression upon a steel’s spark.

Characteristic sparks from a 1 percent steel are shown on the cover.

These differing sparks and their causes are being studied at Canton, Ohio, by Walter G. Hildorf and C.H. McCollam, metallurgists of the Timken Tube and Steel Co., and their findings are already in use in many plants. Spark testing, as the method is called, has provided a cheap and rapid means of sorting different grades of steel that are almost impossible to tell apart from outward appearance.

The new member of the solar system discovered beyond Neptune may not be the ninth major planet predicted by the late Prof. Percival Lowell. Doubt was cast upon its planetary nature by computations made at the Lowell Observatory, where the remarkable solar system outpost was discovered.

Annihilation of matter in the sun to form the energy that is radiated as heat and light is the process that keeps the sun going, Dr. C.G. Abbot, secretary of the Smithsonian Institution, said in a Science Service radio talk over the Columbia Broadcasting System.

“What supplies the sun itself with such an enormous output of energy?” Dr. Abbot asked, and answered: “Astronomers and physicists now think that the sun and all the stars are gradually consuming. I do not mean that they are burning up as coal is burned. When coal is burned it takes on oxygen, and the product in carbonic acid gas is nearly four times as heavy as the coal that is burned. Nothing like this takes place in the sun. The temperature there is so tremendous that water would turn to steam, the steam into oxygen and hydrogen, and the atoms of oxygen and hydrogen largely into electrons and protons, and all this with explosive violence if any water at all could ever reach the sun.”

Future Burbanks will enjoy the same patent protection on their living products that the Wrights, Edisons, and other inventors have long had for the results of their mechanical genius, if a bill now on the calendars of both House and Senate is enacted. The proposed measure has the endorsement of many prominent persons and organizations and is expected to pass.

By its terms, the originator of a new plant variety may apply for and receive a patent on his product just as if it were a machine or a chemical formula. The protection thus to be extended, however, will apply only to plants that can be propagated by asexual or vegetative means; seed-propagated plant varieties, even if new, are not included. A further exception is made in the case of plants propagated by tubers, because of the strong opposition of growers of certain classes of field crops.