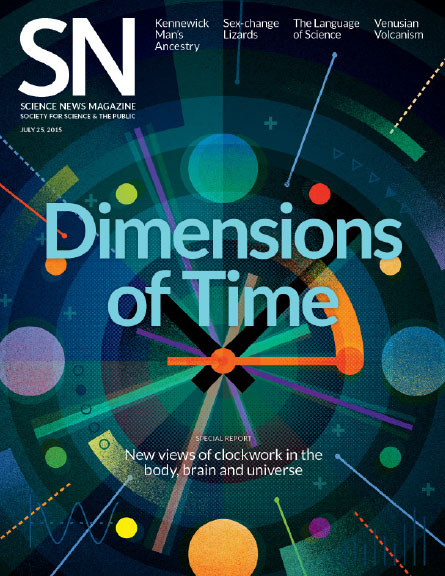 The July 25, 2015 Science News featured an in-depth look at new research on time. Andrew Grant explored why time marches forward instead of backward, Laura Sanders described how the brain coordinates a multitude of internal clocks and Tina Hesman Saey delved into the evolution of biological timekeepers.

“In his introduction, Tom Siegfried repeats the generally held view that the universe tends towards increasing disorder,” wrote Bryan Mumford. “If by ‘disorder’ he means less complexity, it seems to me that in all the years since the Big Bang the universe has tended to become more complex. The atoms naturally assembled themselves into clouds, then stars, higher order elements, planets and life.”

As the universe has evolved, much complexity has come into being compared with the chaotic conditions of the Big Bang, Siegfried says. Creating such complexity does, however, require the use of energy, which in turn generates increasing entropy in the cosmos. So producing complexity, or less disorder, in the universe is more than compensated by the production of entropy; the total entropy or disorder of the universe increases. At least, that is the standard view. Some physicists still pursue interesting questions about how entropy should be defined when the concept is applied to the early universe.

The July 25, 2015 issue of Science News explored a complicated question: What is time? Readers on Facebook supplied their own answers.

Time gives us a sense of before and after, a sense of the chain of causation that is the warp and woof of our lives.

Time is the creation and decay of one event to the next. If nothing ever happened, then the passage of time would not exist.

Time is what we don’t have enough of.

The researchers don’t think that any truly massive undiscovered craters are still lurking on Earth’s surface, but Don McCarthy is not so sure. “It seems presumptuous to conclude that scientists have discovered all the Earth’s impact craters of diameter greater than 6 kilometers,” he writes. “Surely there are potential locations on Earth that have sufficiently low erosion rates and/or remain hidden to our resolution.”

The researchers admit that there could be colossal craters that we haven’t discovered, Sumner says. Some of these could be hidden underground or beneath ice sheets. “There will always be some uncertainty as to whether we’ve truly discovered all of the titanic craters,” he says. “This particular study, however, concludes that most likely we’ve already accounted for all the big ones.”

The language of science

“Not only language shapes how science is done, but also cultural differences,” wrote Fred Cann. “In the ’60s and ’70s, I had to read many British papers on radar receiver design, and found them very hard to follow. The British idea of the best logical sequence to explain something was very different from the American way.”

Commenter ScottyonDenman lamented Russian’s fall from prominence as a scientific language, but pointed out that “the study and use of Russian language in terms of scientific enterprise remains a worthy pursuit; tons of important research that was hidden away by the Soviets is still surfacing and still needs translation. And of course, post-Soviet Russia is still a well-educated and naturally well-endowed nation with huge contributive potential in every field of science.”

A 2014 study in Cell Metabolism about how grizzly bears avoid diabetes despite gaining weight for hibernation (SN: 9/6/14, p. 13) has been retracted. The pharmaceutical company Amgen, which employs coauthors on the paper, requested the retraction after discovering that one of the scientists had manipulated data. The retraction notice, published September 1, notes that some of the authors are repeating portions of the study.