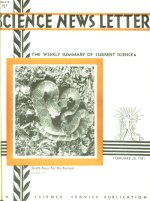 Photographing a rattlesnake is not the idea most of us would have of a healthy outdoor sport, especially when it is necessary to stand almost on top of the coiled and angry reptile to get a really good picture. But Walter E. Flowers of Spokane once let his picture–getting enthusiasm conquer his discretion–with the superb result shown on the cover of this issue of the SCIENCE NEWS LETTER.

Rat-killing with half a million dollars’ worth of radium is the expensive-sounding sport that has claimed the attention of Dr. W.G. Whitman of the Johns Hopkins School of Medicine and her husband, Dr. M.A. Tuve of the Carnegie Institution of Washington.

Only it wasn’t as expensive as it sounded, and it wasn’t done for sport.

The experimenters still had their half-million dollars’ worth of radium left at the end of their experiment. And they performed the experiment to get some idea of how dangerous it may be to work with the 2-million-volt gamma-ray tube that recently won for Dr. Tuve and his associates the $1,000 prize of the American Association for the Advancement of Science.

Dr. Whitman and Dr. Tuve exposed groups of rats to the hardest radiations given off by radium. These are the gamma rays, which are ether vibrations like X rays but much more penetrating, so they go through layers of metal and other substances that stop X rays. They are also more harmful to living tissue.

Adaptation of the diesel engine to a racing car by C.L. Cummins and August S. Duesenberg has increased engineering interest in the 1931 Indianapolis Motor Speedway 500-mile race on Memorial Day.

The new car is nearly twice as large as the conventional gasoline racer. It is thought to be the world’s first diesel-engined racing automobile and is said to carry sufficient power in crude oil to run nonstop at 100 miles an hour for 1,200 miles. This would give the new car the advantage of not having to stop to refuel, which is estimated to be the equivalent of a 5-mile start on the rest of the field.

No ignition system is used in the new car, the heat of compression serving to fire the fuel. The fuel tank holds 47 gallons of crude oil, and the radiator has a capacity of 42 quarts of water.

Mileage is 40 miles to the gallon under ordinary driving conditions. At a speed of 100 miles an hour, the mileage is about 25 miles to the gallon. When tested for speed at Daytona Beach, Florida, the car made 100.722 miles per hour under A.A.A. timing.

Diesel engines offer advantages in strength and economy of fuel and consequently have been adapted to many uses in the past. This is thought to be the first time a diesel engine has been tried in a racing car, however, though they have been used in airplanes.