The Galápagos Islands, known for inspiring evolutionary looks backward, may also offer a glimpse of what’s ahead for coral reefs — and the view is bleak.

Most of the reefs around the island cluster have died out since the 1980s, and nearly all reefs worldwide could face the same fate by 2050, a new study suggests. The study, appearing December 30 in Geophysical Research Letters, unravels how warming temperatures, carbon dioxide and pollution combine to harm reefs.

The Galápagos act as a crystal ball for coral reefs because waters off the islands’ shores now mimic the predicted seas of the future, says study author Derek Manzello, a lead researcher for the National Coral Reef Monitoring Program of the National Oceanic and Atmospheric Administration in Miami. Galápagos waters experience bouts of balmy temperatures and are relatively acidic — both of which are harmful to corals. Climate change and soaring levels of carbon dioxide pollution, which dissolves into the ocean and increases acidity, are expected to create similar conditions worldwide in the coming decades.

The islands’ locations are the reason for their futuristic climate conditions. Cyclical temperature fluctuations of the Pacific, including El Niño events, can crank up water surface temperatures by 3 to 4 degrees Celsius around the islands. And colliding currents from the north and west stir up CO2-loaded, nutrient-rich waters from the deep. 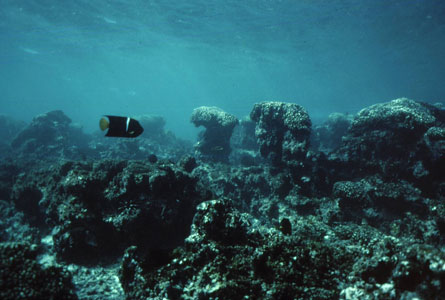 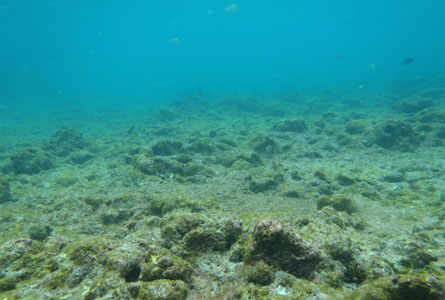 Since 1976 (top), the coral reefs off the coast of Floreana Island in the Galápagos succumbed to warm, acidic, nutrient-rich conditions and were destroyed as of 2012 (bottom).

During the 1982–1983 El-Niño cycle, nearly all of the corals that ringed the Galápagos died off. Many of the islands’ reefs never recovered. The ancient, calcium carbonate-based cityscapes once teeming with corals and other colorful marine life crumbled throughout the following decade. Another El-Niño cycle in 1997–1998 wreaked further havoc on corals. Today, only one lone reef around the northern island of Darwin survives, along with patchy clumps of corals around the archipelago.

To understand more precisely why Darwin’s one reef still stands and the rest collapsed, Manzello and colleagues measured acidity and carbon dioxide levels in water around the islands. The researchers also measured coral growth and how much calcium carbonate the corals produced for reef formation. Like age rings in trees, layers of growth in the corals told how well they did in previous years.

Manzello and colleagues found that the corals experienced varying levels of acidity and CO2 based on their location, probably due to how ocean currents crash against the individual islands. The southern islands experienced the most acidic, high CO2 conditions compared with the northern islands, including Darwin.

Research on imperiled reefs elsewhere suggests that there is an acidic tipping point for corals: a pH of 7.7. On the pH scale, a metric of how acidic or basic something is, 7 is neutral; values lower are acidic and higher are basic. But the norm for ocean waters is around 8.1, making anything lower – like a drop caused by dissolved CO2 — seem acidic. Despite the 7.7 cutoff, Manzello and colleagues found that reefs around the Galápagos at or below pH of 8 never recovered from the El-Niño cycles – and they think they figured out why.

The western and northern currents that pull up acidic water loaded with CO2 also bring up nutrients, including phosphorus. Corals, which thrive in low-nutrient conditions, have mixed reactions to the extra food, Manzello says. On the one hand, the corals grow more. But on the other hand, their calcium-based framework takes up phosphorus. This process produces misshapen chemical building blocks in the structure that result in brittle, fragile reefs. Manzello and colleagues noted delicate reef structures and elevated phosphorus in the island’s corals.

From their analysis, the researchers suggest that the combination of El-Niño cycles, extra nutrients and acidity created a one-two-three punch that was too much for southern reefs to withstand. The lone surviving reef in Darwin has yet to fall below pH of 8.

Unless corals rapidly adapt, the findings suggest a grim future for other reefs, Manzello says. Climate change and carbon dioxide emissions will bring similarly warmer, more acidic waters to other corals. And pollution, such as urban runoff, will bring similar levels of extra nutrients. Such conditions are expected to occur in nearly every reef region on the planet by the middle of the century, he says.

“That’s really scary,” says coral reef ecologist Katharina Fabricius of the Australian Institute of Marine Science in Townsville. The Galápagos is one of the best places to study the effects of climate change on corals, she says. So the fact that well-established corals were lost in a matter of years is frightening.

Coral reef ecologist Paul Sammarco of Louisiana Universities Marine Consortium in Chauvin agrees. “Unfortunately the reefs themselves are dying at a much faster rate than we can study them.” The new data from the Galápagos, he says, help explain why. “We’re not dealing with one problem,” he says. “We’re dealing with a lot of different things that affect corals.”