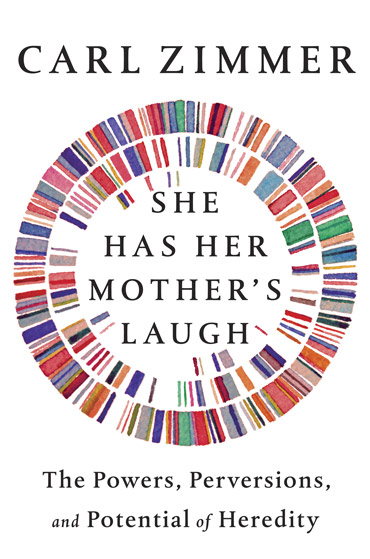 She Has Her Mother’s Laugh
Carl Zimmer
Dutton, $30

The Elephant Man, novelist Pearl S. Buck and Phoebus, god of the sun, all find their way into science writer Carl Zimmer’s latest book. In She Has Her Mother’s Laugh, Zimmer uses famous moments in history — and Greek mythology — to explain genetics and how researchers have come to understand heredity and try to manipulate it.

Zimmer walks through centuries of exploration, settling into stories of scientists who tried to use simplistic notions of heredity to improve the human race. While investigating inheritance, Francis Galton, who coined the term “eugenics,” noticed that notable men had notable sons. He suggested in 1865 that England’s well-being depended on a national breeding program to produce more talented people. His hereditary utopia would make a terrifying episode of TV’s Black Mirror. Galton’s work launched later efforts in the United States to erase undesirable characteristics through sterilization laws and mental capacity checks of immigrants. Eugenics also fed the Nazis’ notion of a superior race. Zimmer doesn’t shy away from the harmful impact of such research and describes the science that showed the flaws in such discriminatory thinking.

This story is part of a multipart series on consumer genetic testing. See the whole series.

With more than 550 pages, the book covers a lot of ground, from discoveries of inherited diseases like phenylketonuria to mosaics, individuals whose cells are not all genetically identical. In places, Zimmer uses the private lives of public figures to introduce advances in genetics. With so many examples, it’s hard to grasp why he included certain stories. Some parts drag a bit, others zing.

We’re all familiar with Joseph Merrick, the Elephant Man. How researchers came to understand why he was deformed is fascinating. In the early 2000s, scientists discovered that several people with the same disease, now called Proteus syndrome, had mutations in the AKT1 gene important to controlling cell growth. There is current work on a drug to block the gene’s actions. Too late for Merrick, but the work offers hope for people today with the disease.

For some readers, the parts of the book that cover recent research history may feel like familiar walks down memory lane, with added context and details. Zimmer takes us back to research on Neandertals interbreeding with ancient humans (SN: 6/5/10, p. 5), Pima Indians and their high rates of type 2 diabetes, and CRISPR, the prized gene-editing tool (SN: 9/3/16, p. 22). Zimmer describes following CRISPR research as a reporter, witnessing “the beginning of something enormous.”

The book ends with cautionary tales about past attempts to toy with nature to fix environmental problems that turned into ecological disasters. Zimmer also points out future risks of gene manipulation that scientists and ethicists have just begun to consider. The next chapter on heredity, he notes, has as many warning signs as opportunities.

Buy She Has Her Mother’s Laugh from Amazon.com. Science News is a participant in the Amazon Services LLC Associates Program. Please see our FAQ for more details.