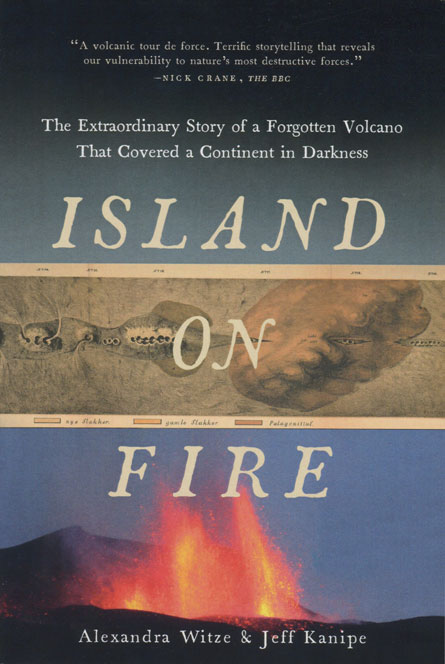 In the last five years, volcanic eruptions in Iceland have disrupted air travel twice, triggering the cancellation of thousands of flights and causing billions of dollars of losses to airlines.

But those geophysical flare-ups are brief whiffs compared with past eruptions on the island: Starting in June 1783, one of the largest lava flows in modern times spilled from a 27-kilometer-long volcanic fissure called Laki in southern Iceland.

In Island on Fire, science writers Kanipe and Witze, the latter of whom is a contributing correspondent for Science News, recount that fateful eight-month-long eruption. They also explain why Iceland has so many dangerous volcanoes that are well-placed to play havoc with regional and global climate, not to mention modern air travel (SN Online: 6/19/12).

Deftly interweaving information compiled by naturalists and astronomers of the day (and even Benjamin Franklin, who was in Paris during the eruption) with interviews with modern-day scientists and historians, the authors provide a captivating overview of an eruption that killed few people directly. But famine and other long-term effects probably took the lives of one-fifth of Iceland’s residents and half of its livestock.

Breathing problems caused by the sulfurous haze that wafted from Laki to Europe may have contributed to the early deaths of tens of thousands. People also starved because the sulfur dioxide in the air produced acid rain, which blighted the continent’s crops. Other Europeans froze to death during the bitter, volcano-cooled winter that followed.

Laki’s eruption influenced life across a large swath of the Northern Hemisphere, and it — or one of its Icelandic kin — will undoubtedly do so again. But the next time, Witze and Kanipe note, a massive eruption could impose far higher costs on a world that’s deeply dependent upon air transport and far more interconnected today than it was in the 18th century.

Buy Island on Fire from Amazon.com. Sales generated through the links to Amazon.com contribute to Society for Science & the Public’s programs.