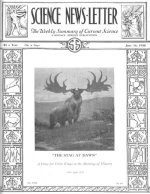 Fifteen hundred million years of life on this planet will be unrolled as a single connected epic in a series of three majestic new halls planned for the Field Museum of Natural History in Chicago. Fossils, rocks, mounted plant and animal specimens, paintings, and statuary will be so arranged that he who walks may read the cosmic book of Genesis, which has never ceased to be written since that ageless day when the heavens and earth rose out of chaos.

This project, Roman in the magnificence of its scope, Greek in the simplicity and directness of its principal theme, Gothic in the meticulous detail of its execution, will be put through with modern American speed. As a matter of fact, the first third of it is already practically completed, and the whole idea will have become a reality by 1933.

Surprising evidence that the prehistoric Mayan Indians knew tricks of perspective as clever as those practiced by famous architects of ancient Greece has been obtained by the Tulane University expedition, led by Dr. Frans Blom, which has returned from Yucatan.

Dr. Blom, during his stop in Washington, said that some of the temple squares in the ruined city of Uxmal appear rectangular, but really are not so at all. Describing the buildings set on four sides of a court known as the Nunnery, Dr. Blom said that the south front end of the Nunnery court is wider than the north. At the same time, the north ends of the side buildings are slightly raised. To the onlooker the court appears square-cut, as it would not, paradoxically, if it were really built square and on the level.

This shows that the Mayans understood the false perspective, an architectural feature that has come to our knowledge only in recent times, Dr. Blom said.

Furthermore, the elaborately carved friezes on the facades of the buildings are tilted outward. This gives better opportunity for the onlooker to enjoy the exquisite carvings, and also produces deeper shadows that make the carvings stand out vividly.

Scientists have often been baffled in their search for disease germs because germs have a stage or stages of development in which they are too small to be recognized by microscopic examination, filtrable through fine filters, and, for a time at least, noncultivable by ordinary methods. This is the opinion of Dr. Philip Hadley of the Medical School of the University of Michigan.

Dr. Hadley, internationally known for his studies of the curious transformations that bacteria undergo in artificial cultures and in the body, told a gathering of scientists at Ann Arbor that he had been successful repeatedly in causing disease-producing bacteria, appearing under the microscope and in cultures in the conventional form, to undergo dissociative changes that rendered them invisible and filtrable through fine-grained earthen and porcelain filter candles. After further laboratory procedures these minute bodies were made to redevelop into the “normal” form. Sometimes weeks or months were required to effect this reversion.