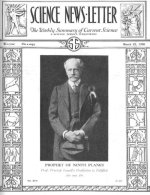 The Lowell Observatory has made the discovery of a celestial body whose rate of motion and path among the stars indicate that it is a new member of the sun’s family of planets out beyond Neptune.

Twenty-five years ago, Dr. Percival Lowell, director and founder of the Observatory at Flagstaff, Ariz., began a mathematical investigation for a planet beyond Neptune, based upon certain unaccounted-for motions of the planet Uranus. The problem of locating such a body in the heavens was a very difficult one and involved an enormous amount of intricate computations. In 1914 he announced in an extensive memoir, as a result of his mathematical work, the position of the predicted body.

The search of the sky directed by Dr. Lowell’s theoretical investigation was begun by photography in 1905 and has been continued with interruptions to the present time. Use has been made of the best available instruments covering that band around the sky in which the planets travel. Early in 1929 the new Lawrence Lowell telescope, a special instrument for the research, was put in operation.

Some weeks ago C.W. Tombaugh found an object on his plates with this telescope, which has since been followed carefully also with the Lowell 42-inch reflector, by C.O. Lampland. It has been observed visually with the large refractor by the various members of the Lowell Observatory staff.

BLACK AS COAL, DENSE AS ZINC

The new planet resembles Earth and the other inner planets in size and brightness more nearly than it does its huge closer neighbors, Jupiter, Saturn, Uranus and Neptune, John Q. Stewart, Princeton astronomer, told Science Service.

Black as coal, nearly as dense as iron, twice as dense as the heaviest earthly surface rocks. So Dr. Stewart’s estimates reveal the new planet. Because of the great pull of gravity shown by Dr. Stewart’s figures, a man there could jump less than half as far as he could here on the Earth.

From the observations showing the planet to be of the 15th magnitude, and the prediction of Prof. Lowell that it would have about 7 times the mass of Earth, Dr. Stewart has made a preliminary calculation of some of the planet’s characteristics.

“The planet is very faint,” he said. “At the same distance from the sun and Earth, Neptune would be about 60 times brighter. Only Mercury and Mars would be fainter. Either Lowell’s predicted mass is not strictly correct or the planet is very dense or very black.”

Dr. Stewart’s tentative results make the planet’s density between 6 and 7 times that of water; its diameter, 14,000 miles; its angular diameter, 0.7 of a second of arc, or about 0.25 the apparent diameter of the moon; the force of gravity on its surface more than twice that of Earth, so that with a spring balance a 150-pound man would weigh something like 325 pounds on the planet. He also estimates that it reflects about 4 percent of the light falling on it, so it would be little brighter than a coal pile.

Naming the trans-Neptunian planet is the next problem of astronomers, and numerous suggestions have been made, which may or may not be followed. One of the most obvious suggestions is to name it Lowell after the astronomer who predicted where it would be found, just as Uranus was known for a time in England as Herschel and Neptune in France as Leverrier. Herschel himself suggest Georgium Sidus after the reigning king, and a parallel is the suggestion that the new planet be named Hoover.

But as a good Harvard man, Lowell himself would probably have preferred a classical name, in accordance with the other planets. Kronos was one of the first suggestions in this class, after the Titan who was the son of Uranus and father of Jupiter. But Kronos was identified by the Romans with Saturn, so it would probably not be fair to put him in twice. Another son of Saturn, Neptune, is already in the sky, so another suggestion is that the planet be named after the third brother, Pluto. One appropriate name that has been suggested is Minerva, because it was by the wisdom of man, of which she was the patron goddess, that the planet was located.