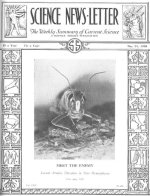 Grasshoppers threaten to wreak heavy damage to grain and forage crops in Montana and the Dakotas this year. There were many hoppers in these states, and in parts of Texas, last year, and the eggs they laid are now hatching in large numbers. If climatic and other conditions favor the growth of the young insects, the outbreak may reach serious proportions. The U.S. Department of Agriculture is urging farmers in the threatened regions to combat the pests now with poisoned bran baits, before they grow their wings and get beyond control by taking to the air.

Old Stone Age implements have been found in the eastern part of Shensi province along the upper courses of the Yellow River, proving that man existed there during the Ice Age, it was revealed at the annual meeting of the Geological Society of China held in Peiping recently.

The discovery was announced by Pére Teilhard de Chardin, the Jesuit priest who, with Pére Licent, found traces of a similar culture on the borders of the Ordos Desert in 1923. Pére Teilhard is president of the Geological Society of France and ranks high among the world’s paleontologists.

Among the specimens exhibited to the meeting were some typical paleolithic scratchers and a boulder of very hard quartzite that appeared to have been broken by heavy blows and probably was used for smashing up other pieces of stone into convenient sizes.

Yeasts, the ultimate sinners in all scofflaw occupations in the United States, have been makers of alcohol for many millions of years. Their cells have been found in rocks older than the Coal Age and infinitely older than the times of the dinosaurs, by Prof. Johannes Grüsz, Berlin paleontologist. With them in many cases were tiny bubbles of carbon dioxide gas, the same stuff that makes the “head” on home brew.

Prof. Grüsz found the yeasts as an incident in his search for the oldest fungi in the world; yeasts are a specialized form of fungi. The other fungi that he found, in rocks of the Devonian Age, were parasites on the primitive plant life of those days. They infested their stems and fruiting bodies, breaking down the cells and feeding on tissues, as parasitic fungi do to farmers’ crops and foresters’ trees today.