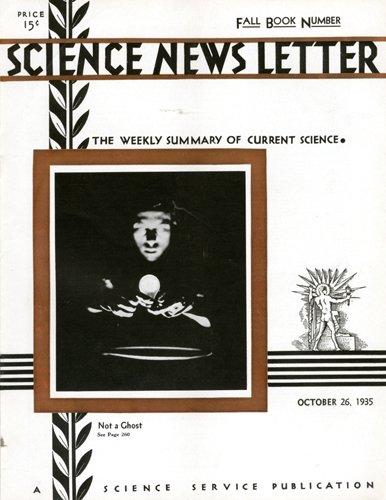 ELECTRIC LAMP LIGHTED WITHOUT THE USE OF WIRES

The General Electric scientist holds an ordinary electric bulb in his hands and makes it shine mysteriously without any wires to provide the ordinary electric circuit. Secret of the trick is a high-frequency radio transmitter hidden below the ring at the bottom of the picture. The radio energy given off is picked up by the antenna system composed of the scientist’s arms and body, which form a loop.

The virus that causes human influenza has been cultivated upon nonliving food in a glass flask.

This important step in understanding a disease that has caused widespread epidemics in recent years is announced by Drs. Thomas Francis Jr. and Thomas P. Magill of the Rockefeller Institute for Medical Research in a communication to the journal Science (Oct. 11).

SUPER-HARD GLASS MADE IN SUN FURNACE

A new type of “glass” of super-hardness and with high resistance to acids was reported before the meeting of the Electrochemical Society by Dr. Willi M. Cohn of the University of California.

The “glass” is fused transparent zirconium dioxide (Zr02) having a slightly yellowish tinge. It was made by melting compressed sticks of Zr02 in a special sun furnace that concentrates sunlight with a large mirror and quickly raises the temperature to 3,000 degrees on the Kelvin temperature scale. Three thousand degrees Kelvin corresponds to more than 2,700 degrees Centigrade.

The zirconia glass can be heated to incandescence and dipped into cold water without cracking, is highly resistant to acids, and ranks next to carborundum in hardness.

The sun furnace, with which the zirconium dioxide sticks were melted and fused, is a new step in obtaining high temperatures, Dr. Cohn reported. While it is difficult to determine exactly what temperatures such sun furnaces will create, the theoretical limit is the temperature of the sun’s surface at 6,000 degrees Kelvin, or 10,000 degrees Fahrenheit.

The sun furnace, which Dr. Cohn obtained from the Zeiss Works in Jena, Germany, consists essentially of a large plane mirror that follows the course of the sun and reflects the sunlight onto a 100-inch diameter searchlight mirror with a silver backing.

The heating takes place at the focus of the searchlight mirror. Arrangement is made for observation of the samples while being heated. If necessary, the sample can be placed in a transparent container and its reactions studied in a reducing or neutral atmosphere or in a vacuum.