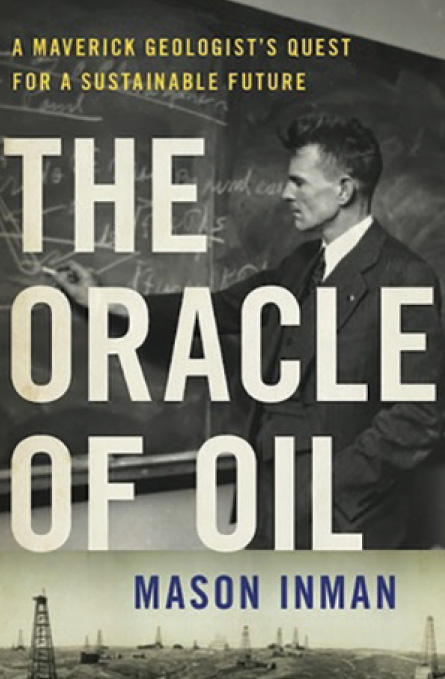 In the 1950s, long before the climate change debate began, geophysicist Marion King Hubbert presented research that made the oil industry queasy. Society needed to quickly wean itself off its dependence on oil, he concluded, or face dire consequences. Hubbert’s argument wasn’t motivated by the global climate impacts of fossil fuel burning, but rather by a bold prediction that U.S. oil production would soon peak and quickly taper off.

In The Oracle of Oil, journalist Mason Inman explores Hubbert’s life and legacy as the father of “peak oil.” Hubbert’s career as an academic, oil industry insider and government scientist was intertwined with the politics and engineering that led to oil becoming the world’s dominant energy source. More than a biography of the scientist, the book is also a chronicle of the oil industry.

Hubbert grew up on a Texas farm before selling his cow for train fare and setting off for college in 1923. After transferring to the University of Chicago, he paid for tuition by laboring 13 hours a day with a two-hour round-trip commute. His hard work paid off, however, and his early research provided groundbreaking insights into how geologic forces deform Earth’s rocks and how groundwater flows. In 1956, while working for the Royal Dutch Shell oil company, Hubbert calculated that conventional oil production in the continental United States would peak in the late 1960s, with a global peak a few decades later.

In 1956, Marion King Hubbert predicted world oil production would peak in about 2000. Production has surpassed this forecast, reaching over 30 billion barrels in 2014.

That provocative prophecy mired Hubbert’s later ideas and career in controversy. His work as a scientist for the U.S. Geological Survey was further complicated by his political views and involvement in the technocracy movement, which argued that technical experts should control governments and industries.

Even today, Hubbert’s critics and supporters still debate his oil forecasts. Inman continues his story beyond Hubbert’s 1989 death and discusses the recent boom in oil and gas production in the United States. Hubbert’s critics contend that this production uptick, thanks in part to technologies such as fracking and horizontal drilling (SN: 9/8/12, p. 20), undermines Hubbert’s assumption that new techniques wouldn’t significantly boost production. Hubbert’s supporters, however, warn that oil and gas companies are racking up billions of dollars in debt to squeeze every last extractable drop of oil out of the ground and that production could peak by 2020. “We’re setting ourselves up for a major fiasco,” Tad Patzek, an earth scientist at the University of Texas at Austin, tells Inman.

Inman paints a well-researched, well-written portrait of a driven and gifted scientist who stood up to politicians and oil conglomerates alike. The Oracle of Oil provides a compelling perspective on what Hubbert might have called society’s fossil fuel folly.

Buy The Oracle of Oil from Amazon.com. Sales generated through the links to Amazon.com contribute to Society for Science & the Public’s programs.