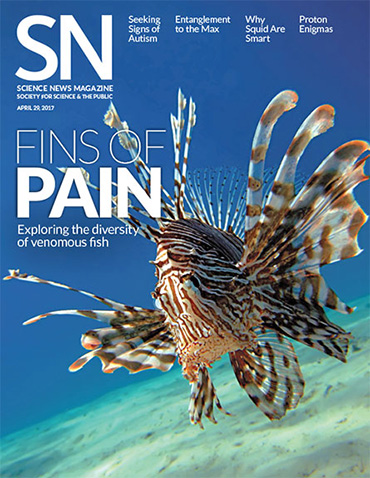 Uncertainty over the proton’s size, spin and life span could have physicists rethinking standard notions about matter and the universe, Emily Conover reported in “The proton puzzle” (SN: 4/29/17, p. 22).

Readers wondered about the diameter (or size) of the proton, which has three fundamental particles called quarks rattling around inside. “Still scratching my head over how combining three dimensionless quarks ends up forming a proton with a ‘diameter,’ ” online reader Down_Home wrote. “Maybe that word doesn’t mean what I think it means.”

The three quarks within the proton are only apparent when the proton is probed with high-energy particles, Conover says. At lower energies, particles “see” the entire proton as one entity. “In that case, the proton just behaves like a sphere of positive charge,” she says. Scientists measure the size of this sphere by looking at how electrons are deflected when they come close to the proton. “Researchers disagree on the sphere’s diameter, which makes for a bit of an identity crisis for the proton,” Conover says.

Nearly 30 percent of ice covering the Arctic Ocean at summer’s peak is thin enough to foster sprawling phytoplankton blooms in the waters below, a recent study estimated. These ice-covered blooms were probably uncommon just 20 years ago, Thomas Sumner reported in “Thinning ice creates undersea greenhouses in the Arctic” (SN: 4/29/17, p. 20).

Several online readers wanted to know how the under-ice blooms get the carbon dioxide they need to photosynthesize.

Eating live octopus can be dangerous, but some dolphins in Australian waters have figured out how to do it safely, Sarah Zielinski reported in “How a dolphin eats an octopus without dying” for the Wild Things blog (SN Online: 4/25/17). Dolphins shook and tossed their prey over and over until the octopus went limp and its sucker-covered arms relaxed. Watch a video of the feeding frenzy at bit.ly/SN_OctopusToss

Others wondered about the blooms’ potential effect on climate. “I’m not sure if this is good or bad news,” reader Witch Daemon wrote. More phytoplankton could mean that the Arctic could store more carbon, but the blooms wouldn’t exist if it weren’t for warming and melting ice, Witch Daemon reasoned.

When phytoplankton are trapped under ice, they absorb CO2 that’s dissolved in the upper ocean, says oceanographer and study coauthor Christopher Horvat of Harvard University.

What the blooms might mean for storing carbon in the ocean is uncertain, Horvat says. But if these under-ice blooms occur in addition to the familiar blooms along the edges of the ice, then there’s a chance that more carbon could be stored away.

Most of the gases in Mars’ atmosphere may have been stripped away by solar wind, Ashley Yeager reported in “Extreme gas loss dried out Mars” (SN: 4/29/17, p. 20). The loss of so much gas may explain how the planet morphed from a wet, warm world to a dry, icy one.

Online reader Robert Knox wondered how long it took for the solar wind to strip Mars of its atmospheric gases. “Earth is closer to the sun, so the solar wind is more intense,” Knox wrote. “Why did this not happen to Earth?”