Taking a cue from cardiology, doctors have begun treating strokes caused by blood clots in the brain by the most direct route imaginable — approaching the blockage from inside the artery.

The concept is well-tested. Obstructed heart vessels are routinely opened with balloon-tipped catheters threaded up to the blockage. Attempts to clear obstructions in the brain have proved devilishly difficult, though (SN: 10/8/11, p. 14). Just two years ago, the idea appeared doomed.

But recently, a string of successes using a new device made just for the brain has rendered clot extraction a reality, revolutionizing stroke treatment. Five studies all show that people in the throes of a major clot-based stroke are better off getting the clot removed by a stent-tipped catheter plus standard care than by getting standard care alone. Four trials were stopped early because the device’s benefit was indisputable.

“This is a once-in-a-generation change in acute stroke care,” says neurologist Jeffrey Saver, director of the UCLA Stroke Center in Los Angeles. “It’s been about 20 years since the last stroke therapy — tPA — came along,” he says.

Until now, tPA, or tissue plasminogen activator, has been the best available option. It’s a clot-dissolving drug given intravenously to some stroke patients. But while dissolving a clot with tPA is less invasive than extracting it with a mechanical device, tPA clears obstructions from only about one-third of jammed cerebral arteries. “A retrievable stent can open up 80 to 90 percent of them,” says Saver, who coauthored one of the clot extraction trials. “We’re entering a new era.” 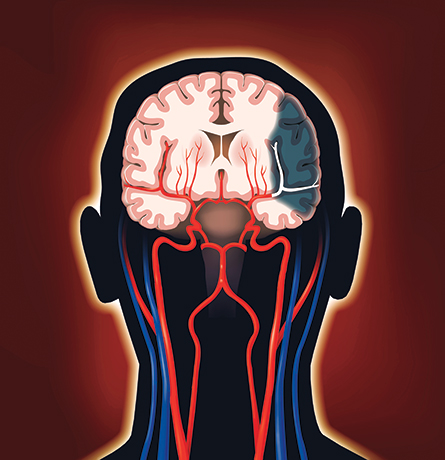 Clots in major arteries of the brain can cause disabling strokes. This illustration depicts how an obstruction can starve a part of the brain (shaded area) by shutting off its blood flow.

Not everyone can receive tPA, so the clot-retrieving device, called Solitaire, will expand the number of stroke patients who are treatable, says Michael Hill, a neurologist and emergency medicine doctor at the University of Calgary in Canada. Combined with improved brain imaging, he says, the clot retriever might extend the crucial time window after stroke onset in which treatment can be performed in some patients without risk of doing more harm than good.

The five trials, all published in the New England Journal of Medicine this year, included patients who had a large blood clot in a major cerebral artery. Every year, roughly 800,000 people in the United States have a stroke. Large clots cause about one-fifth of them, says Walter Koroshetz, a neurologist and acting director of the National Institute of Neurological Disorders and Stroke in Bethesda, Md. “That’s a lot of people. This is what fills up nursing homes and care centers,” he says. “These strokes rob people of their personality and ability to function.”

Patients in these trials were randomly assigned to get the clot extracted or to get tPA or, in some cases, both. To extract a clot, a doctor inserts a catheter into a large artery in the groin then threads it up to the brain, directed by real-time imaging. Once the catheter reaches the clot, a wire inside of it tunnels through the obstruction. The doctor withdraws the wire and replaces it with the stent-retriever device, which springs open and grabs the clot. The whole mechanism is then retracted, restoring blood flow that rescues the starving brain cells downstream that have not yet died.

Scientists measured the clot-retriever’s value by assessing the patients’ status 90 days after their stroke. In one trial in Australia and New Zealand, 71 percent of those getting clot extraction plus tPA were functionally independent by then, with no significant disability related to the stroke. Only 40 percent getting tPA alone were doing this well. Similarly, in an international trial that Saver coauthored, 60 percent of patients getting the extraction procedure were functionally independent compared with 35 percent getting just tPA. Both trials were stopped early.

“For the stroke field,” Koroshetz says, “I think this is the biggest thing to ever happen, because you can really take somebody who’s going to have a horrible outcome and save them.”

The clock starts ticking the moment a blood clot lodges in a major brain artery. Downstream, about 2 million neurons die on average each minute until blood flow is restored, Hill says. “The biological imperative is speed.” Stroke patients routinely undergo a quick CT scan at a hospital or stroke center to discern whether they have a bleeding or clot-based stroke. Bleeding rules out tPA, which would exacerbate it. Patients with clots who qualify are given tPA, but those on blood thinners, with high blood pressure or certain other conditions can’t receive it. Even among those who qualify for tPA, the drug fails to dissolve big clots most of the time.

The shortcomings of tPA spurred research into mechanical extraction devices (SN: 2/17/07, p. 99). But brain arteries are curvy and fragile compared with heart vessels, and merely inserting a device into the brain risks collateral damage. In three studies in 2013, patients treated with older-generation brain-clot retrievers and tPA fared no better than those just getting tPA. At that point, the quest appeared futile.

Stroke patients randomly assigned to get a clot removal procedure in addition to a standard clot-dissolving drug (tPA) did better three months later than those treated with the drug alone.

But testing was already under way for the new stent-retriever device, developed by Covidien, a pharmaceutical company acquired this year by Minneapolis-based Medtronic. The results now show that the device safely removes brain clots, even long stringy ones.

Not all patients in the recent studies recovered fully after clot extraction, probably because the brain had sustained too much damage before blood flow was restored, Hill says. Even so, the high-tech advance arrives at a good time, he says. Brain imaging has improved, and emergency departments and stroke centers have become more efficient in promptly moving patients from scanning rooms to an angiography lab for catheter insertion.

Time is brain, stroke researchers like to say, and time lost is brain lost. For years, the time window for treating strokes with tPA has been up to 3 to 4&frac12; hours. With more accurate brain imaging and the availability of clot retraction, the window could now widen in people who have a slow rate of tissue loss. “Our study showed a benefit through six hours” with retraction, Saver says.

Even with the new device, tPA will still have a role in stroke care. When a stent-retriever snags a clot, it doesn’t always get it all. Bits of clot drifting downstream can block smaller arteries, causing mini-strokes. Giving tPA can dissolve these escapees.

Patients enrolled in these studies were assigned to get tPA if it was safe for them. It worked so fast in some that they were excluded from the trial, just as would happen in a hospital since there would be no clot left to extract. “The researchers wanted to make sure they didn’t take credit for something tPA did,” says Osama Zaidat, an interventional neurologist at the Medical College of Wisconsin and Froedtert Hospital in Milwaukee, who wasn’t part of these trials. This strengthens the findings, he says.

The Solitaire retriever has been approved for use by the Food and Drug Administration. New practice guidelines, set by a panel of experts in the field, are likely to come out soon governing stent retrieval, Zaidat says. The new results will probably require some regional hospitals in rural areas to add doctors or other staff trained in the new technology, he says.

One curious finding that begs for more research also emerged from these studies. Patients might do well to be conscious during clot retrieval, says Tudor Jovin, a neurologist at the University of Pittsburgh who coauthored three of the five stroke papers. “The reasons are unclear,” he says, “but the outcomes were dramatically better with the patient awake.”

COME AND GET IT  The clot-retrieving device called Solitaire can extract clots from delicate, jammed-up brain arteries. In this video animation, a tubelike catheter and wire are inserted into a large artery in the groin and threaded up to the brain, directed by real-time imaging. The wire pokes through the obstructing blood clot as a guide for the catheter, which pokes through next. Then the wire is retracted and replaced by the clot-removing device. The catheter is pulled back, allowing the spring-loaded device to pop open and snatch the clot. The retriever and clot then get reeled back to the catheter, where the clot is suctioned into the tube. The whole device is then retracted, restoring blood flow. Credit: Medtronic