Like an interplanetary parfait, the dwarf planet Ceres appears to have layers.

A pliable outer shell of minerals, ices and salts encapsulates a core of solid rock, a new study suggests. This first peek inside Ceres — courtesy of NASA’s Dawn spacecraft — can help researchers explain some mysteries on the surface and provide insight into the many ways planets and asteroids might be assembled. Ryan Park, a planetary scientist at the Jet Propulsion Laboratory in Pasadena, Calif., and colleagues report the findings online August 3 in Nature.

“Before we got to Ceres, we didn’t know what the interior looked like,” Park says. “Its evolution is more complex than what we envisioned.”

Ceres is the largest body in the asteroid belt, the field of rocks that lies between the orbits of Mars and Jupiter. The Dawn spacecraft has been orbiting Ceres since March 6, 2015, its second stop after spending 14 months at the asteroid Vesta (SN: 4/4/15, p. 9). As Dawn loops around Ceres, slight changes in the speed of the spacecraft — deviations of less than 0.1 millimeters per second — reveal the dwarf planet’s gravity field. By combining these measurements with images that show the overall shape of Ceres, the researchers deduced how mass is spread out inside. The core has a density similar to some meteorites; the shell (roughly 70 to 190 kilometers thick) is about two-thirds as dense.

Computer simulations (top) suggest that Ceres should have nearly 200 craters wider than 100 kilometers. Images of Ceres (bottom) from the Dawn spacecraft have turned up only 16. Colors indicate when craters should have formed. 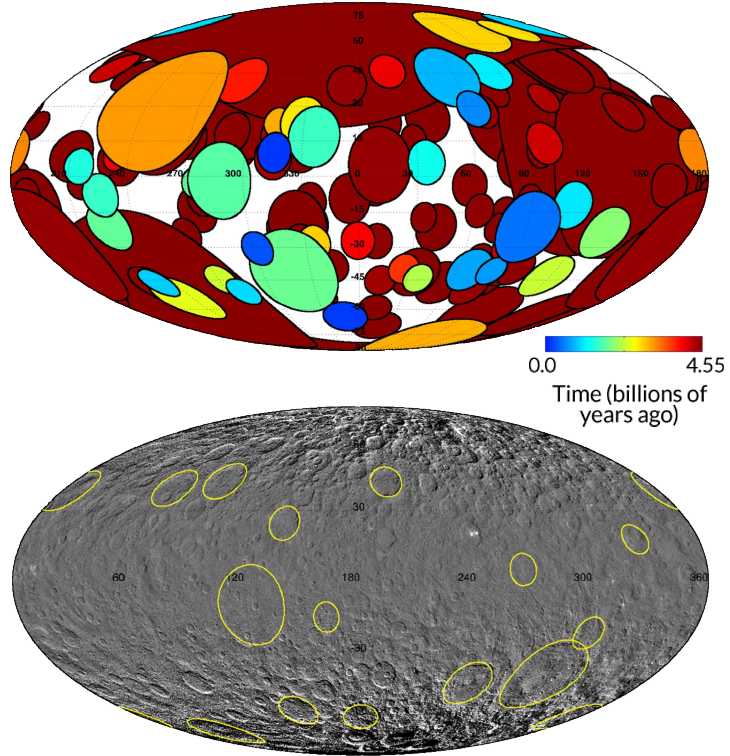 Mountains on Ceres appear to float on a deformable layer of minerals and volatile elements that easily evaporate, Park and collaborators report. If Ceres were completely solid, then gravity over a mountain would be stronger than the surrounding terrain because of the increased mass. But gravity on Ceres doesn’t vary with topography, the researchers find. This suggests that mountains and hills displace mass beneath the surface, “like how a boat floats on water,” says Park. To keep the underlying layer slightly flexible, the temperature inside Ceres must be warm relative to the surface. That heat could come from radioactive decay or be left over from when Ceres assembled itself over 4 billion years ago.

This segregation of material — a solid core topped with a malleable crust — can help researchers learn about the environment in which Ceres formed, says Simone Marchi, a planetary scientist at the Southwest Research Institute in Boulder, Colo. Densities within these layers can lead to estimates of how much ice and radioactive material lies buried beneath the surface, he says — abundances which depend on how far from the sun Ceres was born.

Understanding the internal structure could also be key to solving a mystery: No craters on Ceres are wider than about 280 kilometers, which is odd given what researchers know about the population of rocks that should have slammed into it (SN: 9/5/15, p. 8). Something probably eroded those craters, though it’s not yet clear what. Marchi speculates that the erosion has something to do with Ceres’ internal evolution and composition.

Aside from getting an idea of how Ceres is put together, the findings can be applied to other worlds both in our solar system and around other stars, says Peter Thomas, a planetary scientist at Cornell University. Insight from Ceres adds “a whole new dimension of things that may not have been imagined before,” he says. “How many different kinds of objects — planets, dwarf planets, asteroids — can you get?”