Bits of filaments and feathers trapped in amber 79 million years ago offer an unusually wide-ranging view of what late dinosaurs and early birds were wearing.

The 11 small, amber-bound specimens found in Canada span an evolutionary range of late Cretaceous fashion, from what appear to be unbranched filaments — which have been proposed as the first stage of dinosaur feather evolution — to bits of sophisticated, corkscrewy barbs like the wettable feathers on modern diving birds, a team from the University of Alberta reports in the Sept. 16 Science.

Such a range has shown up squashed in rock fossils, but “we’re seeing the same thing preserved in beautiful 3-D forms,” says coauthor Ryan McKellar. “It’s preserved down to the point of having pigment, which opens up the doorway for all sorts of weird and wonderful investigations.”

To find the 11 specimens, McKellar screened more than 4,000 pieces of amber, collected from the discards of a coal mining operation near the town of Grassy Lake in southern Alberta. McKellar speculates that back in the day, the area was some kind of salt marsh along the edge of the great seaway that ran through what is today western North America.

This trove of amber gives independent evidence that ancient feathers and even simple filaments indeed carried pigment, says evolutionary ornithologist Richard Prum of Yale University. “I was stunned to see the level of detail preserved,” he says.

How feathers evolved has roused heated debate in recent years, as compressed-rock fossils of dinosaurs have turned up bearing what look like protofeather filaments or fuzz. Well preserved dinosaur fossils such as Anchiornis even show feathers with complex branching. All but the most complicated asymmetrical flight feathers have shown up so far in dinosaurs, Prum notes.

Simple filaments or clusters of filaments may have been early stages of feather evolution, unable to heave an animal off the ground but possibly of use for insulation or courtship displays. Fancier structures that weren’t flight-capable may have given an aerodynamic boost for animals rushing up steep slopes.

A few fragments of ancient feathers or protofeathers have turned up in amber before, including bits from Lebanon, France and New Jersey in the United States. But none of the previous finds from dinosaur times have shown the diversity of the newly described assemblage, McKellar says.

He and his colleagues found not only what looks like an unbranched filament but what has been proposed as a possible second stage in feather evolution, a cluster of filaments. Prum ranks the second-stage feathery bit as “really great” and convincingly identified, but admits nagging reservations about how definitively the simple filament can be linked to a dinosaur or bird instead of some other debris snagged in amber.

A separate striking amber specimen shows a birdlike feather branching into secondary twigs, or barbules, with hooklets like those in modern bird feathers that zip together side-by-side barbules to make a tight, interlocked surface. Barbules on another specimen spiral at the base, a feature that allows a feather’s linked elements to loosen a bit when wet. Such feathers on a modern waterbird ease diving by reducing trapped air, and they allow parents to soak their feathers in water and then ferry the drink back to chicks.

None of the amber-trapped feathers had original owners attached. So the researchers can merely speculate that the simpler ones might be from dinosaurs and the more complicated structures from birds. “It’s a really neat cross-section of what had plumage during the late Cretaceous,” McKellar says.

McKellar, an invertebrate paleontologist, found the feather bits as part of a Ph.D. project searching for tiny, amber-encased wasps less than 3 millimeters long. Under the high-resolution scrutiny required to find the insects, miniature feather bits showed up too. Paleontologist Jakob Vinther of the University of Texas in Austin says he was pretty excited when he heard McKellar talk about the amber fossils. Vinther, who has identified microscopic pigment-bearing structures in fossil feathers, tried to persuade McKellar to give up some small bits of his specimens for examination by scanning electron microscope. But McKellar, who averaged a find every 360 specimens or so, says he’s not ready to sacrifice any of the samples just yet. 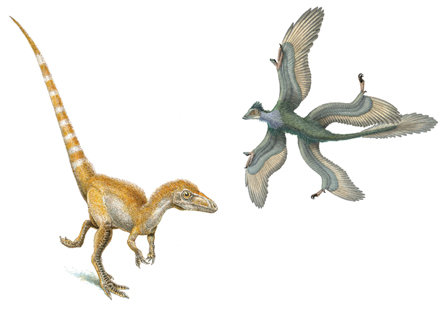 Depending on who’s counting, rock fossils of about 15 genera of nonbird dinosaurs have revealed feathers. Add in fossils with less direct evidence of feathers, such as knobs on bones where quills could have attached, and the number soars into the 20s. Most of these marvels have entered the scientific literature since 1996, when a small but startling Sinosauropteryx (illustrated below) fossil was described as a bird. Paleontologists later hailed it as a dinosaur despite patches along its spine of short, simple filaments, what’s now called “dinofuzz” and proposed as the first stage in the evolution of modern bird feathers. More recently described dinosaur fossils such as Microraptor gui (illustrated above) have featured more evolutionarily complex feathers with central shafts. In 2010, a research team in China even reported evidence that a Similicaudipteryx species replaced its feathers in birdlike molts. And a feathered fossil flap has arisen about whether Archaeopteryx , long touted as the first known bird, was actually a dinosaur with feathers. These glimpses of feathers on what were once believed to be scaly reptiles have reinvigorated the notion, first proposed in 1868, that modern birds evolved from the celebrity carnivore lineage of theropod dinosaurs.