Roughly 90 percent of lung cancers stem from tobacco use, with cigarette smoking the main culprit. While cutting back has been known to reduce the overall risk of lung cancer, two long-term studies by separate Scandinavian research teams now show specifically the hazard induced by various amounts of smoking and the benefit that accrues from quitting. 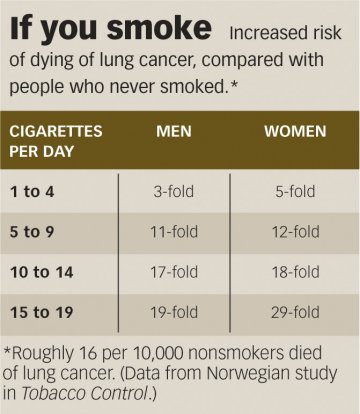 One group reports that heavy smokers who halved their cigarette use reduced their lung cancer risk by more than one-fourth, but quitting decreased the risk more dramatically. The other group also finds that less is better, but its results show that even a cigarette or two each day significantly increases the chances of dying of lung cancer compared with not smoking at all.

These studies should debunk the misconception that there is a safe level of smoking, says Nina S. Godtfredsen of the Hvidovre Hospital in Denmark. “It’s really not possible to set a minimal threshold because even very light, occasional smoking is associated with some risk,” she says.

“There are two messages here,” comments oncologist Peter G. Shields of Georgetown School of Medicine in Washington, D.C. “The less you smoke, the better it is. [But] some smoking is clearly worse than no smoking.”

For their investigation, Godtfredsen and her colleagues tapped into a database of health and lifestyle information on 19,714 Danes that other researchers had collected between 1964 and 1993. Those scientists had recorded each person’s original smoking status and then added information gleaned from at least one follow-up visit.

At the end of 2003, Godtfredsen and her coworkers consulted a national cancer registry to learn whether the people in the database had developed lung cancer.

People who smoked 1 to 14 cigarettes a day had experienced slightly less than half as many lung cancers as heavier smokers had, the scientists report in the Sept. 28 Journal of the American Medical Association. Those lighter smokers, however, were still roughly four times as likely to get lung cancer as nonsmokers were.

People who had quit smoking before being enrolled in the original database had 17 percent as many lung cancers as the heavy smokers had, while people who never smoked at all had just 9 percent as many. Smokers who quit during the years of data collection halved their risk, while heavy smokers who cut their intake in half saw their lung cancer risk drop by 27 percent.

In the other study, Norwegian researchers tracked 42,722 people first contacted during the 1970s. When the scientists assessed death records at the end of 2002, they found that men who smoked only one to four cigarettes a day still faced triple the risk of dying of lung cancer that nonsmokers did. Women who smoked that few cigarettes showed a fivefold boost in risk.

This report, published in the October Tobacco Control, is the first large-scale assessment of the effect of light smoking in both men and women, says coauthor Kjell Bjartveit of the National Health Screening Service in Oslo. While previous data had hinted that light smokers still might face a health hazard, he says, “we didn’t know it would turn out to be so big.”