SEATTLE — The Kepler space telescope has added 554 planet candidates to the growing list of worlds beyond the solar system, astronomers announced January 6 at the American Astronomical Society meeting. In addition to producing the bevy of possible planets, Kepler researchers have confirmed another eight worlds with the potential for hosting liquid water on their surfaces.

The data bring Kepler’s total number of planet candidates to 4,175, including more than 800 with diameters roughly the size of Earth’s. Among these far-off locales are a few worlds that might not be too different from home.

“These are the closest analogs to the Earth-sun system to date,” said Fergal Mullally, an astronomer at NASA’s Ames Research Center in Moffett Field, Calif. One such candidate, designated KOI 5737.01, is roughly 1.3 times as wide as Earth and takes just over a year to orbit a star with a temperature similar to the sun’s. The planet orbits within the star’s habitable zone, the region around the star with the right temperature range for liquid water, an essential ingredient for life.

Researchers found the new candidates while analyzing the final year of data from Kepler. The planet hunter spent from 2009 to 2013 staring at more than 150,000 stars in the constellations Cygnus and Lyra, looking for the silhouettes of planets passing, or transiting, in front of their host stars (SN: 12/27/14, p 20). Until now, Kepler predominantly found planets with relatively short orbits, which means they transit often enough to be seen multiple times in a couple of years. With the additional year of data, researchers have finally been able to probe for Earth-sized planets in the habitable zones around sunlike stars, where transits may happen only once a year. 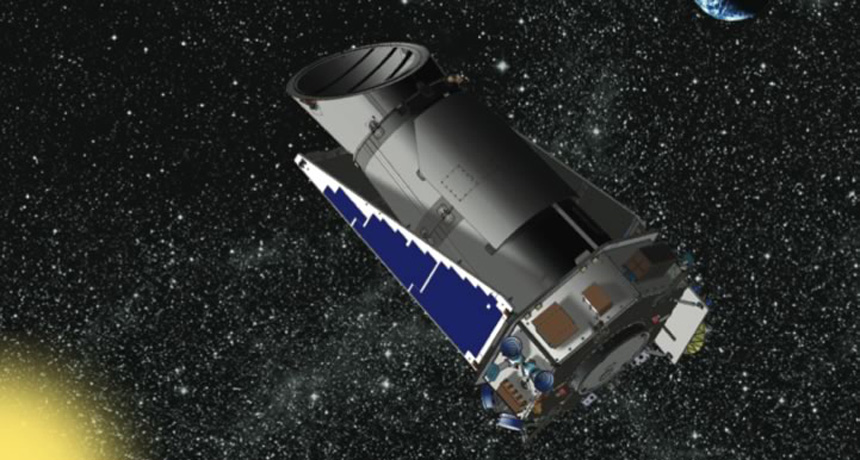 Using the Kepler telescope, seen in an artist’s illustration, scientists have now identified over 4,000 exoplanet candidates from the telescope’s four-year mission.

Mullally cautioned that scientists still have to verify whether all the possible planets are, in fact, planets. Kepler sees planets as periodic dips in starlight as they pass between their stars and the telescope. But companion stars, star spots and other phenomena can mimic this signature. Ideally, astronomers would turn to ground-based telescopes to confirm the detections by looking for tiny wobbles in the host stars caused by the planets’ tugs. Unfortunately, many of these worlds are too small and too far from their stars for such wobbles to be detectable. Researchers will instead have to calculate how likely each detection is to be a real world.

Researchers have applied such calculations to the first three years of data. As a result, they have verified that eight previous candidate planets may be habitable. That brings the number of confirmed worlds with the potential ingredients for life to 13. Two of these newly confirmed worlds, Kepler 438b and 442b, are rocky planets not much bigger than Earth. Each orbits a faint, red star that is much cooler than the sun.

“Kepler’s done an amazing job,” says Joshua Pepper, an astronomer at Lehigh University in Bethlehem, Penn. Not only has the telescope turned up Earth-sized, possibly habitable planets, he says, but it’s also revealed a lot about the tremendous variety of planetary systems. Knowing what types of stars host planets and how those planets are arranged helps future missions choose where to look. The Transiting Exoplanet Survey Satellite, which will launch in 2017 and which Pepper is involved with, will use Kepler’s results to target stars that are closer to Earth. Other instruments, such as the James Webb Space Telescope, scheduled to launch in 2018, will then be able to follow up and attempt to measure the planets’ atmospheres.

Kepler’s main mission ended in 2013 because of a broken part (SN: 6/15/13, p. 10) but researchers found a workaround that enabled the telescope to keep observing in a more limited fashion (SN: 6/28/14, p. 7). The team is still analyzing the main mission’s data, said astronomer Douglas Caldwell of the SETI Institute in Mountain View, Calif. As researchers continue to refine the techniques they use to mine the data for planets, he expects more hidden worlds will turn up.