The Kepler space telescope is not quite dead. NASA’s planet-hunting space observatory got a second chance at life this year. And mission scientists analyzing already-collected data unearthed hundreds of new worlds, including a potentially habitable Earth-sized planet.

For four years, Kepler stared at one patch of sky in the constellations Cygnus and Lyra and monitored roughly 150,000 stars for tiny dips in starlight — silhouettes of orbiting planets. Kepler’s goals included counting planetary systems and stars hosting planets the size of Earth.

In April, the Kepler team reported the smallest potentially habitable exoplanet known: Kepler 186f, about 490 light-years away. It is just 10 percent wider than Earth and orbits its dim, red star at a distance where liquid water could exist (SN: 5/17/14, p. 6). But astronomers don’t know if the planet can support life.

Earth-sized Kepler 186f sits much closer to its star than Earth does to the sun. But because its star is much cooler and fainter than the sun, the exoplanet may still be habitable and home to liquid water. 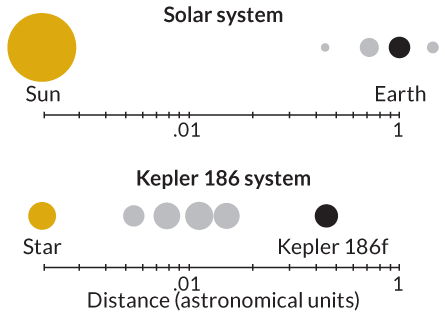 Astronomers also determined that the rocky planet Kepler 10c is a “mega-Earth,” 2.4 times as wide as Earth but 17 times as massive, roughly the mass of Neptune (

Subscribe
SN: 7/12/14, p. 10 ). Researchers thought that anything heavier than 10 Earth masses should become a gassy planet like Jupiter. Theorists are puzzling over how such a massive rock could form.

Such discoveries came amidst concern over Kepler’s supposed death. After four years, it could no longer keep its balance, and was forced into retirement last year (SN: 9/21/13, p. 18). But throughout winter and spring of 2014, engineers tested an ingenious solution: point the peak of the solar panel roof toward the sun and use the balanced pressure from sunlight to steady the telescope. The successful test persuaded NASA to fund a new mission for Kepler. Rechristened as “K2,” the mission will scan for exoplanets along with asteroids, star clusters and galaxies (SN: 6/28/14, p. 7).