Reports of Kepler’s death have been greatly exaggerated.

NASA’s flagship planet hunter, which netted nearly 1,000 confirmed exoplanets during its four-year mission, is getting a second chance at life with a little help from the sun. The space agency has given the new mission, dubbed K2, the go-ahead to start observations at the end of May.

Kepler was knocked out of commission last spring when the second of its four reaction wheels stopped working (SN Online: 5/15/13). The reaction wheels keep the telescope pointed in the right direction; any spacecraft needs at least three. Once Kepler was down to two wheels, it could no longer sufficiently steady itself to search for other solar systems.

Shortly after the first wheel failed in 2012, says Steve Howell, project scientist for the Kepler mission, engineers at Ball Aerospace came up with an ingenious solution for continuing on two wheels: Use sunlight to balance the telescope.

One side of Kepler is plastered with solar panels that come together at an angle like a roof on a house. When rain falls straight down on a roof, Howell says, both sides get the same amount of water. If Kepler points the peak of its solar panel roof at the sun, each side gets the same gentle nudge from sunlight and the forces cancel; the light acts like a third reaction wheel to steady the spacecraft.

Kepler’s new mission, K2, will use sunlight to make up for a lost reaction wheel and keep the telescope balanced. K2 will scan the ecliptic sky, looking at a new field roughly every 80 days, as it searches for more planets and other celestial gems. (Click graphic to enlarge) 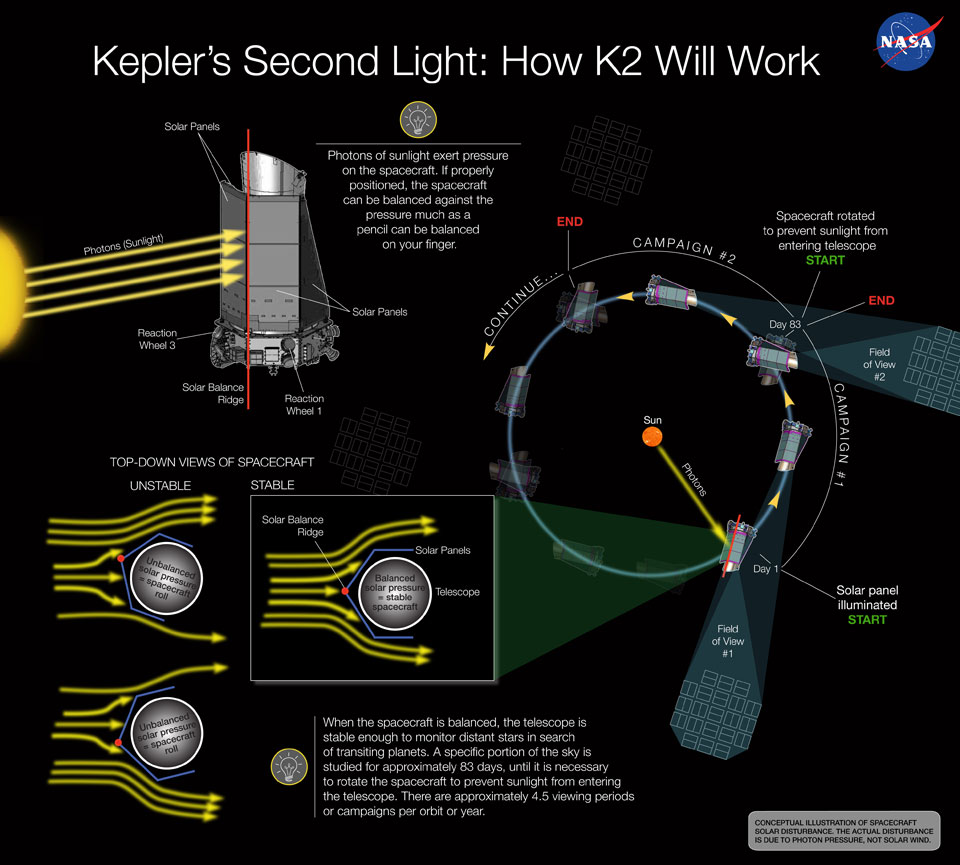 To do this, Kepler won’t be able to gaze in the same direction it has for the last four years. Instead, Kepler will point along the ecliptic, the band of sky encircling the solar system and aligned with Earth’s orbit.

As Kepler trails Earth around the sun, it will stare at one chunk of sky for roughly 80 days at a time, then turn to face somewhere new. The length of time and where the telescope can look are limited by the location of the sun. If the telescope swings around to a patch of sky too early, sunlight will hit the panels at too shallow an angle to generate sufficient power. If Kepler stares for too long, sunlight could bounce down the telescope tube and blind the planet hunter.

Kepler scientists spent most of last fall testing the idea with the spacecraft. “Because this hadn’t been done before,” Howell says, “we had no previous way of knowing if it would work.” Months of tests eased the team’s concerns. While balancing on sunlight means K2’s precision isn’t as good as the original mission’s, it’s enough to continue the hunt. In January, K2 recorded a dip in starlight when a known exoplanet, WASP-28b, passed between its star and Kepler. The K2 mission has “really turned out to be a lovely combination of science and spacecraft engineering,” he says.

Ben Oppenheimer, an astronomer at the American Museum of Natural History in New York, agrees: “It’s a very clever thing these guys came up with.” Oppenheimer chaired NASA’s 2014 Astrophysics Senior Review Panel, which was charged with making recommendations about which of the agency’s missions to continue funding. “We really felt [the Kepler team] made a very, very good case,” he says, adding that Kepler won’t be limited to exoplanets. K2 will add star clusters, galaxies and bodies in our own solar system to the spacecraft’s repertoire. “It’s going to be a fun romp through the ecliptic,” Howell says.

K2 can last for up to three years, depending on Kepler’s fuel reserves. The small adjustments needed to keep the solar panels aligned don’t use much fuel. The big spender is when the telescope swings around to point its antenna at Earth so engineers can download data and upload new instructions. Howell says Kepler scientists might be able to conserve fuel by using the remaining two reaction wheels to steer the telescope. This isn’t a new idea: The International Space Station uses its reaction wheels to spin around without thrusters. By driving the spacecraft this way, he says, astronomers could keep K2 running for many years.

That’s assuming no other important parts die. “We’ve had a joking discussion of what do we do with one reaction wheel,” Howell says. “So far no great ideas have surfaced.”

Pointing along the ecliptic adds poetic symmetry to Kepler’s original mission. Since they sit in the plane of Earth’s orbit, any potential alien civilizations with telescopes along this path would see Earth the same way Kepler sees them — as a shadow passing in front of the sun. Howell says NASA has already received one proposal to look at 18 to 20 stars that are lined up perfectly with the ecliptic. “So someone might be watching us now,” he says.