The insects that unearthed themselves to breed in 2013 belong to three distinct species. You need only flip them over to see some differences, written in the varieties of their orange markings.

You can hear the differences too, says Chris Simon of the University of Connecticut in Storrs. The tymbals on either side of a male’s abdomen vibrate to make the racket for which cicadas are famous. A chorus of courting Magicicada cassini males sounds like an electric carving knife revving up. M. septendecula coughs out a series of  rasps. And M. septendecim serenades with the whistling drone of a B-movie spaceship.

The various thrums and buzzings may mingle in the same neighborhood, but the last time ancestors of these species mated with each other was almost 4 million years ago, Simon says. That’s the conclusion of the most detailed genetic studies yet of periodical cicada evolutionary history, which Simon and colleagues published in April in the Proceedings of the National Academy of Sciences. With DNA plus episodic field observations, the scientists are getting an idea about the odd family tree of periodical cicadas, how the insects synchronize their life cycles and why they breed side-by-side with others unsuitable for mating.

Biologists have named a few thousand cicada species worldwide, all within the families Cicadidae and Tettigarctidae. Cicadas nestle on the evolutionary tree of life among planthoppers and related botanical vampires that suck plant fluids — not with locusts as is commonly thought. But only the seven named species that make up the genus Magicicada live underground for more than a decade and then burst forth to breed in multi-species masses. These periodical cicadas live in eastern and central North America, where biologists and spring-wedding planners alike keep tabs on the 15 different cohorts, or broods. The broods are identified according to the years in which they cycle into frantic reproduction.

From then to now

On an evolutionary family tree, the periodical cicadas branch and then fan into species sets with patterns that echo each other. And since this is biology and not mathematical theory, odd anomalies show up here and there.

For example, consider the origins of the 13- and 17-year cyclers. A biologist from another planet might hypothesize that such a dramatic difference in life cycles arose once when ancient ancestors of today’s 17-year species diverged from 13-year counterparts. Logical enough, but not what happened, Simon says.

The big, new family tree confirms that a common ancestor first split into three lineages (called Cassini, Decula and Decim) and then each lineage independently evolved 17-year and 13-year forms. So this year’s cicada brood, designated by the Roman numeral II, comprises a 17-year species from each of the three ancient lineages. And the closest sister species of this year’s breeders are not each other but 13-year cyclers locked in with different broods. 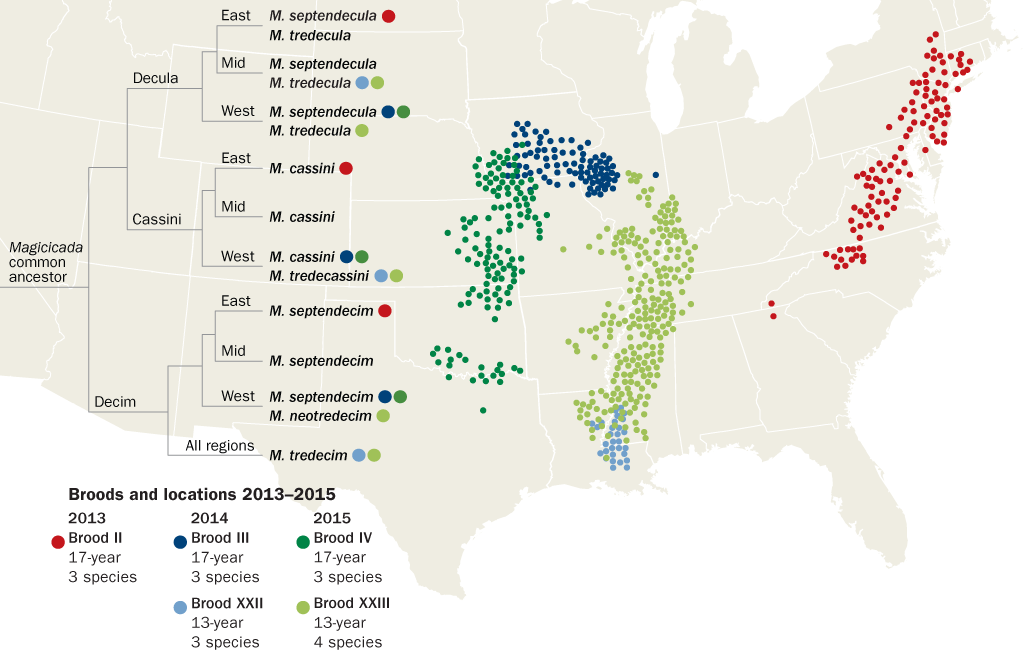 Almost any year,  periodical cicadas burst from the ground in mating frenzies in the eastern  United States. A single cohort, Brood II, emerged in 2013, but in 2014 and  2015, both 13- and 17-year cicada broods will emerge. (Color-coded dots show  observed or expected locations.)

Most broods include a mix of what are  considered separate Magicicada species, which evolved from a common  ancestor almost 4 million years ago (family tree, left). Those ancestors  branched into three main lineages: Decula, Cassini and Decim. Now each lineage  has its own 13-year species (“tre” prefix) and 17-year species (“septen”  prefix, not used in M. cassini).

Species from each lineage live in all  regions (east, middle and west) where cicadas are found. The genetics of the  regional populations mirrors their geographic distribution (shown on tree).

What preserves the multi-species broods may be cicada predators, says Rick Karban of the University of California, Davis. Cicadas haven’t evolved the common insect defenses of camouflage or nimble flight. These are big, noisy bugs without many escape skills. “You can pick them off a tree,” Karban says. “They’re just seemingly … dumb.”

But with thousands, millions or billions living conspicuously for the same brief period of time, each individual has a better chance of surviving. Predators can’t eat the whole generation. There’s safety in extreme numbers, so synchronizing with a different species beats coming out with just your own in smaller numbers and getting picked off by hungry birds. As segments of different species overlap in their reproductive timing, they “get sucked into a brood,” Simon says. Only one brood, VII, consists of just one species.

Surging forth in great numbers to thwart predators is not some special cicada thing, Karban notes. Cicadas get the headlines, but mayflies transforming from their aquatic to aerial forms synchronize, and oak trees drop occasional bumper crops of acorns.

How the cicadas manage to synchronize may be trickier to explain, though. In fact, cicadas in the same brood grow idiosyncratically. Karban has dug up samples of periodical cicadas during their underground years and found all kinds of out-of-sync stages of development. Those that race through the five stages of underground life end up waiting for the signal to emerge, giving the laggards time to catch up.

What that signal might be is also in question. Soil temperature probably cues the right calendar day for the neighborhood mass emergence, but how the cicadas choose the right year is a puzzle. They could “count” the years with seasonal changes in the tree sap they feed on, Karban speculates. To test this idea, he dug up cicadas with two years yet to go underground and moved them onto roots in a colleague’s research set of peach trees. The colleague coaxed the trees to flower twice in one year, and cicadas emerged as if two years had passed instead of one.

But why so long underground? Karban’s answer is basically, why not? A long immature period may have more advantages than disadvantages. Again he has gone digging. His samples of cicadas from underground don’t show much evidence of premature death by predator attack. And spending more time growing may mean bigger bodies with the power to have more offspring. The 17-year cicadas he unearthed in the Midwest were in the process of forming more eggs than 13-year ones living nearby.

A long development time could also have been a big boon for surviving the ice ages, says geologist Randy Cox of the University of Memphis, who has analyzed how climate affects the pattern of cicada emergences. During ice ages, he points out, even southern refuges had chilly years, and a really cold spell could wipe out a population. The longer a cicada’s cycle, the fewer times populations would have to play climate roulette.

If big numbers are good for cicada life cycles, he and other researchers suspect that big, prime numbers (divisible only by one and themselves) are even better. Predator populations can rise and fall in cycles too. If cicadas had a 12-year cycle instead of a 13-year one, for example, they would coincide more frequently with big years of any predators on two-, three- or four-year cycles.

Those big, prime numbers might also minimize unfortunate hybridization between cicadas timed to breed on different cycles, Cox suggests. When such cicadas’ reproductive years coincide, any cross-breeding could doom offspring. Their half-brood genes could lead them to reproduce in some intermediate year between mom’s and dad’s regular cycle. Without the company of millions of pure-broods, hybrids would be easy pickings for predators and reproductive dead-ends for their family lineages. But with life spans of 13 and 17 years, the simultaneous emergence of broods on different schedules happens only once every 221 years.

Cicadas may even somehow influence predator cycles, suggests ornithologist Walt Koenig of Cornell University. Decades of nationwide citizen-science surveys of breeding birds show that cicadas tend to show up during dips in numbers of seven cicada-eating birds, including American crows and blue jays. This may not be coincidence. That feast of easy-to-catch cicadas may somehow set bird populations on rise-and-fall trajectories that miss big cicada years, he and Andrew Liebhold of the USDA Northern Research Station in Morgantown, W.Va., proposed in the January American Naturalist. “Even we think this is kind of weird,” he says, “but it fits the data.”

However the brood emergences came to be, they’re worth seeking out. “Cicadas are one of the big natural spectacles of North America,” Karban says. For those who missed the show this year, he promises, one of the 15 periodical broods will break out loud and dumb somewhere almost any year.

Billions of noisy bugs may attract all the attention, but the cicadas’ mass emergence is just the  final blip in the long life of the periodical species. All seven species spend  the majority of their lives buried in the soil. Then, on cue, they surface to  find a mate and reproduce. 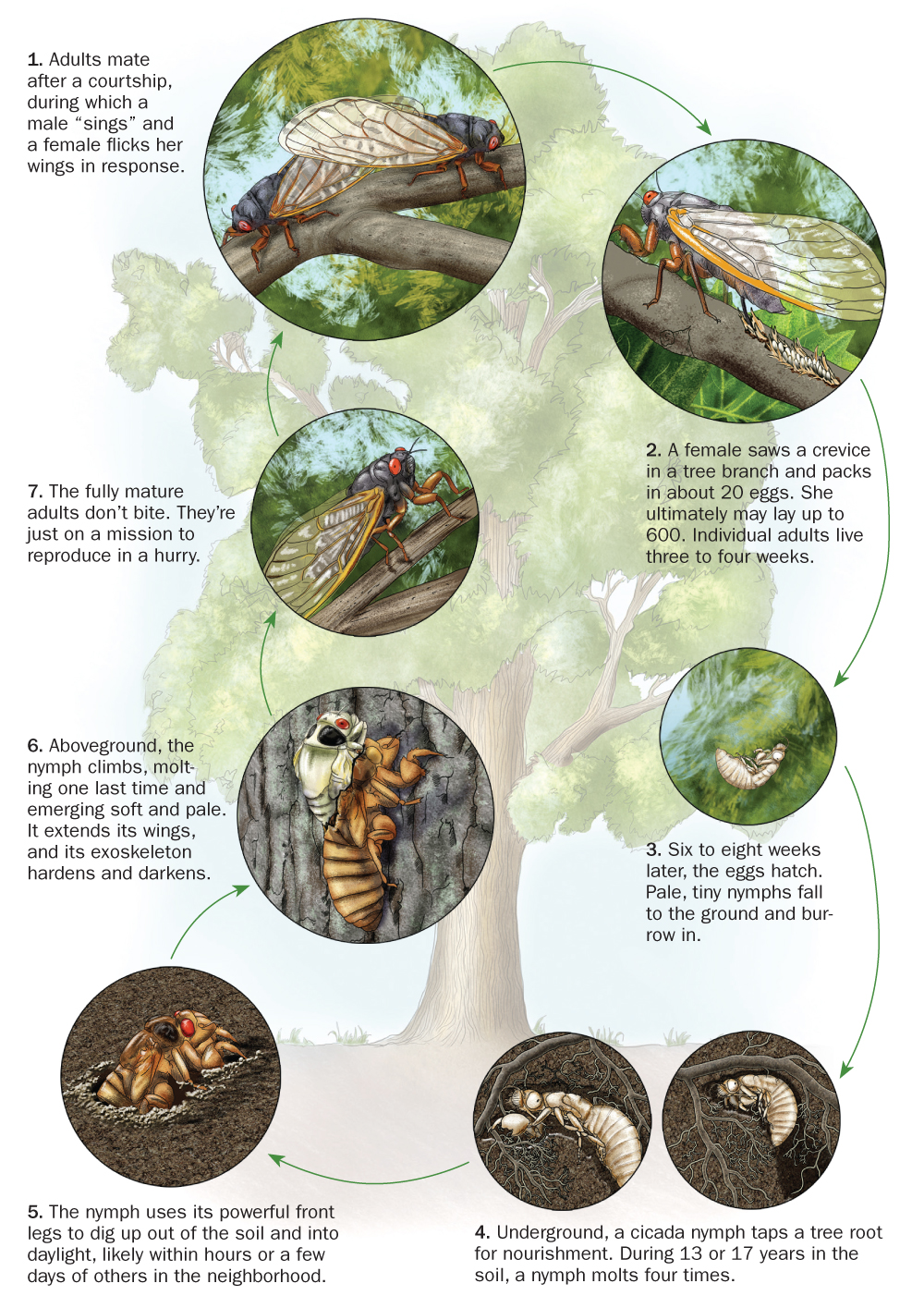