Nature abounds with perfect helices. They show up in animal horns and seashells, in DNA and the young tendrils of plants. But helix formation can get complicated: In some cases, the direction of rotation can reverse as a helix grows. The resulting structure has been dubbed the hemihelix, and you may have made one yourself by untwisting part of a telephone cord so much that it flips and spirals in the other direction.

Katia Bertoldi, a professor of applied mechanics at Harvard University, and her colleagues wanted to see how hemihelices form on their own. So they stretched a strip of silicone rubber, glued it to a second, unstretched strip and let the pair go. The researchers reported April 23 in PLOS ONE that they could get a range of shapes to form by tuning the dimensions of the glued rubber pieces. (Watch a video of the experiment)

Strips that were much thicker than they were wide spiralled gently to form helices. Those with squarer cross sections relaxed themselves with a strong twist, forming hemihelices with one or many regularly spaced changes in direction.

“It’s sort of a competition between bending and twisting,” Bertoldi says. She and her colleagues are now experimenting with rectangular patches of rubber to see how this same stretch-and-release approach can be applied to make other three-dimensional shapes. 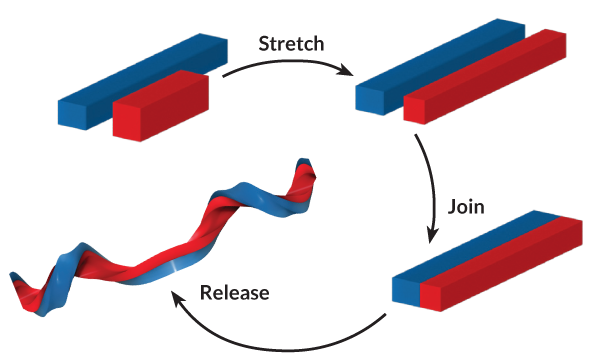 To create helical structures, one silicone strip (red) is stretched to match the length of a longer strip (blue). The pair is glued together and then released. Depending on the dimensions of the strands, a helix or hemihelix (one shown right) forms as the pair relaxes.

The number of changes in direction, or “perversions,” in a hemihelix depends on the cross section of the bonded strips (shown actual size below). Keeping width constant (blue = 3 mm, red = 1.89 mm), researchers decreased the thickness of the strips (shown as height) for more perversions.