On the periodic table, most elements have at least one stable form. But others have only unstable forms, all of which decay by emitting radiation and transforming into different elements until becoming one that’s stable. The timescale of radioactive decay is known as an element’s half-life, the time it takes for a sample of an element to be reduced by half.

Generally for the elements after uranium, the further along they are on the periodic table — the higher their atomic number — the less time they last. Half-lives of unstable elements vary by nearly 30 orders of magnitude. For comparison, the Milky Way’s diameter is about 30 orders of magnitude larger than the width of a DNA helix.

The graphic below charts the time it takes for the longest-lived isotope — a form having the same number of protons but a different number of neutrons — of each of the unstable elements to decay. (These half-lives are not exact numbers; each has an uncertainty associated with it.) Even when plotted on a logarithmic scale, with the distance between points on the graphic representing bigger amounts of time as the half-lives grow, bismuth, the longest-lived unstable element, is off the charts.

Will all future elements discovered have shorter and shorter half-lives? Scientists aren’t so sure. They expect to reach a theoretical “island of stability,” where half-lives will buck the trend. These elements might last a few seconds, or a day. No one knows what properties they’ll have, or if these elements could help scientists learn more about how the atom — and thus all of matter — holds itself together. And so researchers keep smashing atoms together, hoping to paddle closer to the island’s fabled shore.

This graphic plots the life spans, or half-lives, of the periodic table’s unstable elements (blue) on a logarithmic scale. Data for each element’s longest-lived form, or isotope, are included, along with familiar comparisons (green). 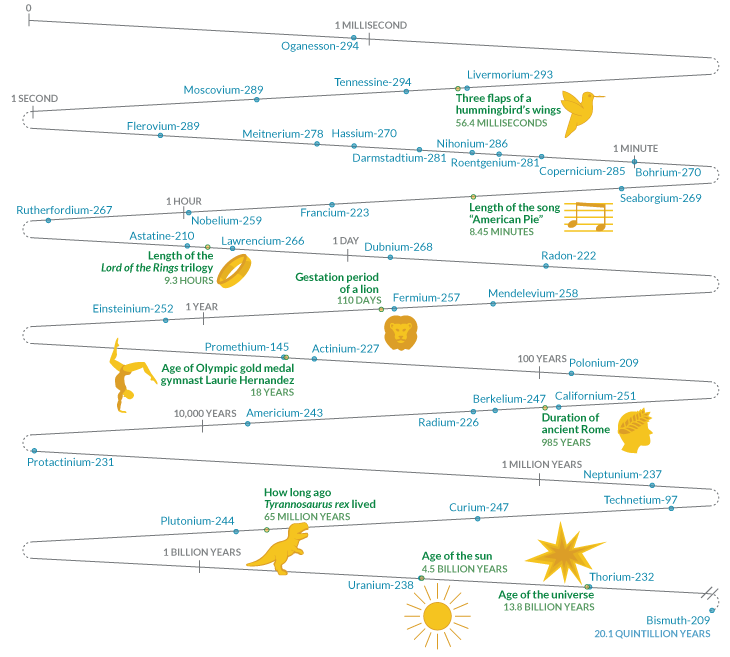