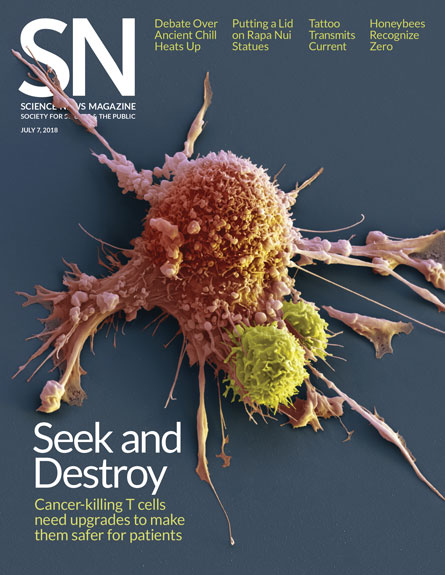 In the last five years, Antarctica has lost ice nearly three times faster on average than it did over the previous 20 years — largely due to climate change, Laurel Hamers reported in “Antarctica has lost about 3 trillion metric tons of ice since 1992” (SN: 7/7/18, p. 6).

“Isn’t there a volcano or multiple volcanoes recently found under Antarctica that might also be contributing to the melting?” asked reader Leslie Hruby.

There are nearly 140 volcanoes under West Antarctica alone that we know about, Hamers says. The recent analysis calculated the rate of ice loss for the entire continent based on satellite data. Scientists didn’t consider the volcanoes’ potential contribution.

Whether under-ice volcanoes are contributing to the ice retreat today is unclear. However, the volcanoes could affect future melting in a number of ways, researchers from the University of Edinburgh argued in a 2017 study published in a Geological Society of London special report. Among the possibilities: Multiple eruptions could destabilize the ice and speed up melting. Increased melting could also trigger eruptions: Thinning ice reduces pressure on Earth’s mantle, promoting the potential for eruptions, the team proposed.

Pigs and birds remain prime suspects for mixing up the next influenza virus to cause a pandemic in people. But dogs also carry flu viruses that can recombine to make new strains, making the animals worth keeping an eye on, Tina Hesman Saey reported in “Dogs carry a surprising variety of flu viruses” (SN: 7/7/18, p. 8). “Welp, time to become a cat person,” Reddit user evolvedtwig quipped.

Scientific research “is an important component of addressing the climate change issue, but is necessarily only one part of the solution,” Cooley wrote. “And ultimately, getting public acceptance of any such plan will involve discussion of the other components, including the costs of action and the costs of inaction.”

Still, Cooley thought the research was a good first step. “To make a meaningful response to the climate crisis, as a start it is important to nail down the science and objective factual data so the discussion is not limited to arm waving, wishful thinking and uninformed emotional appeals and manipulation.”

During the proposed process of dark fusion, dark matter particles could fuse together and give off energy, Emily Conover reported in “If real, dark fusion could help demystify this physics puzzle​​​​​​​s” (SN: 7/7/18, p. 9).

“Could dark fusion be the source of dark energy?” reader Andrew Benton asked.

No, says physicist Sam McDermott of Fermilab in Batavia, Ill. The amount of energy that would be released during dark fusion is not enough to account for the vast amount of dark energy in the universe. “Even if every single dark matter particle undergoes fusion, which seems unrealistic, we could only extract approximately 0.03 percent of the observed dark energy from dark matter fusion,” he estimates.