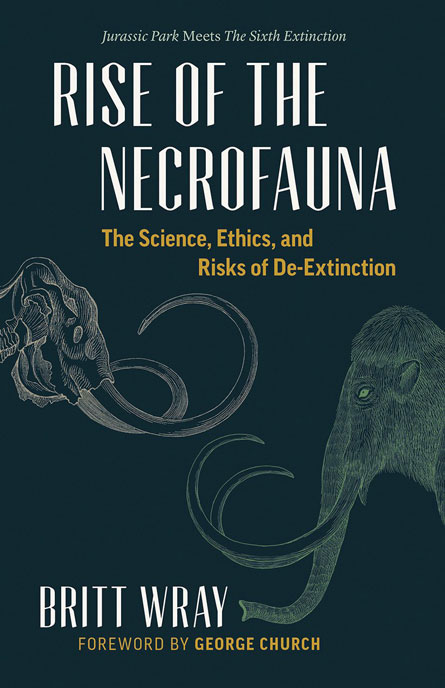 A theme park populated with re-created dinosaurs is fiction. But if a handful of dedicated scientists have their way, a park with woolly mammoths, passenger pigeons and other “de-extincted” animals could become reality.

In Rise of the Necrofauna, writer and radio broadcaster Britt Wray presents a comprehensive look at the unprecedented technical difficulties of raising the dead, plus the deep philosophical questions surrounding de-extinction.

The aim of current de-extinction efforts is to use gene-editing tools to engineer living species to re-create extinct cousins, such as engineering a woolly mammoth from an elephant. This “molecular magic” is not the effort’s main limitation, de-extinction scientist George Church claims in the book. Instead, the biggest hurdles are the same that conservationists face when reintroducing endangered species to native habitats.

As Wray explains, habitats for many extinct creatures are gone or conditions are perilous. Take the gastric-brooding frog. The species, known for converting its stomach into a uterus and vomiting tadpoles, was driven to extinction in 1983 by chytrid fungal infections. A project to clone the frog managed to get the cells of another frog species to replicate gastric-brooding frog DNA — a promising first step in restoring a gone-too-soon species. Still, Wray wonders, “Is it really the right time to clone the gastric-brooding frog when the chytrid fungus that first killed the species continues to annihilate amphibians around the world?” Not to mention the hostility other reanimated species might face if their interests run counter to those of humans sharing a habitat.

Another ethical dilemma is whether it’s better to invest in bringing back extinct animals or in pulling endangered species back from the brink. For instance, if scientists could engineer gastric-brooding frogs to resist chytrid fungus, then researchers could make living amphibians fungus-proof, too. Or tricks borrowed from de-extinction could inject genetic diversity into dwindling populations, like those of black-footed ferrets on the Great Plains. Church and others, though, argue that de-extincting animals sparks the imagination in ways that merely maintaining endangered populations doesn’t.

Wray doesn’t pick a side until the end, and even then, she presents the full nuance of the “can we/should we” questions — many of which have no easy answers.

Buy Rise of the Necrofauna from Amazon.com. Science News is a participant in the Amazon Services LLC Associates Program. Please see our FAQ for more details.