Chimps rotate their upper bodies about as much as people do while walking, thus countering the force of their swinging hips, say paleoanthropologist Nathan Thompson of Stony Brook University in New York and his colleagues. So even if Australopithecus afarensis, a hominid best known for Lucy’s partial skeleton, had a somewhat chimplike build, that didn’t prevent these ancient hominids from sauntering efficiently across East African landscapes, the researchers propose October 6 in Nature Communications.

“We know now that the more chimplike aspects of Lucy’s trunk wouldn’t have posed a barrier to upright walking,” Thompson says.

Longstanding disagreements remain over the extent to which Australopithecus species, including Lucy’s, were able to walk like present-day people, Thompson adds.

Still, the new findings indicate that Lucy and her 3.9-million- to 3-million-year-old cohorts rotated their hips and upper bodies in a humanlike way while walking, remarks paleoanthropologist Brian Richmond of the American Museum of Natural History in New York City. “It looks like Lucy might have had some swagger in her step after all,” Richmond says. 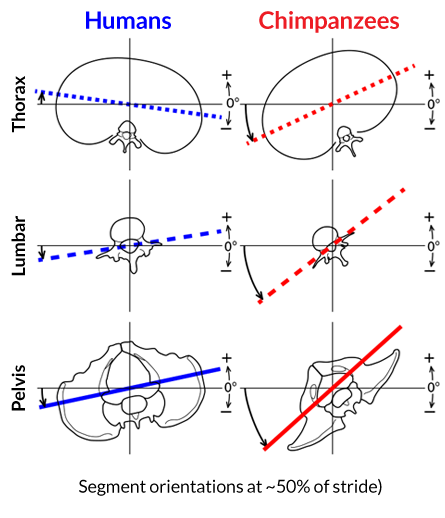 Halfway through a leg stride while walking, chimps and humans turn the upper body (thorax) to about the same extent (top). The two species rotate the thorax in opposite directions. Chimps display greater midstride rotation of the lower back (lumbar region) and hips (pelvis) than humans do.

People move their hips and upper bodies in opposite directions during upright strides. These opposing motions, aided by swinging arms, provide balance and stability. But it’s been assumed that chimps keep their upper bodies rigid when walking on two legs. Researchers suspected that large, wide hip bones, a short lower back and a flaring lower rib cage restrict the apes’ flexibility. Debate has raged over the last 40 years about the extent to which Lucy’s species shared these skeletal features with chimps.

Thompson’s team used 3-D video recordings to determine how much the hips, abdominal region and upper body moved as 10 people and two chimps walked across an 11-meter-long runway. Chimps in the wild walk on two legs as well on all fours, a gait known as knuckle-walking. Each chimp in the study completed seven trials, sometimes on its own and other times following a researcher carrying a juice reward. Each human volunteer completed five trials.

Unlike humans, chimps rotated their upper bodies in the same direction as their hips during upright strides. They swing first one whole side of the body forward, then the other. But the magnitude of upper-body movements relative to the hips was nearly the same for both species.

It now appears that chimps can approach a humanlike gait despite having evolved radically different hips and upper bodies than those of modern humans since splitting from a common ancestor roughly 7 million years ago, says paleoanthropologist C. Owen Lovejoy of Kent State University in Ohio.

Lovejoy disputes the notion that Lucy’s kind had somewhat chimplike hips and upper bodies, as argued by Thompson and colleagues. A humanlike upper body characterized not only early hominids but also a chimp-human ancestor, Lovejoy proposes. Recently discovered remains of an adult male A. afarensis include a humanlike second rib (SN: 7/17/10, p. 5), a good indicator that this hominid’s rib cage supported efficient walking, he argues.

Lucy’s kind “was as fully capable of walking and running as we are,” Lovejoy says.

Thompson isn’t so sure. It’s hard to know whether A. afarensis could have rotated its hips and rib cage enough to run, he says.