Dinosaurs weren’t quite like cold-blooded reptiles, but they weren’t like warm-blooded birds either. Instead, they fell smack-dab in the middle.

The findings offer new clues into how the animals lived and also rekindle a longstanding debate. “This paper will make us go back to the drawing board,” says paleobiologist Martin Sander of the University of Bonn in Germany.

For years, paleontologists assumed that dinosaurs most resembled modern reptiles and other cold-blooded creatures — slow-growing, low-energy sluggards that bask in sunlight for heat and don’t need much food. “When I was a kid, dinosaurs were just scaled-up, tail-dragging reptilian brutes,” says paleobiologist Gregory Erickson of Florida State University in Tallahassee.

The field took a U-turn in the 1960s, he says, when researchers found similarities between dinosaurs and modern birds. Over the next few decades, most paleontologists came to think of dinosaurs as warm-blooded animals — creatures that grow quickly, expend lots of energy and regulate their body heat internally — inspiring popular depictions such as the speedy beasts of Jurassic Park.

By plotting the growth rates and energy use of 353 modern animals, researchers estimated that dinosaurs were probably more like tuna and leatherback sea turtles than cold-blooded reptiles or warm-blooded mammals. 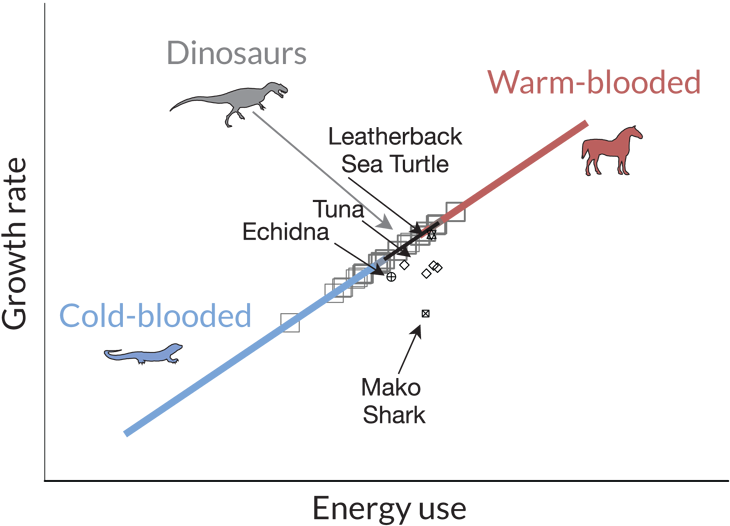 But trying to shoehorn dinosaurs into one of two camps might be too simplistic, says John Grady, a paleoecologist at the University of New Mexico in Albuquerque.

Previous work had hinted that the animals might not sort so cleanly into either group. So Grady and colleagues designed a massive study to pinpoint dinosaurs’ place on the spectrum of cold- and warm-blooded life.

His team tabulated the growth rates and energy intake, or metabolism, of 353 modern animal species. The census ran the gamut from slow-growing, low-metabolism crocodiles to rapidly-growing, high-metabolism ostriches. Then the researchers capitalized on other paleontologists’ careful analysis of dinosaur bones to collect the growth rates of 21 dinosaurs, including Tyrannosaurus and Apatosaurus.

Grady and his team couldn’t determine the metabolic rates of creatures that have been extinct for at least 65 million years, but they could make estimates based on their data from living animals. When Grady plotted the animals’ growth rates and metabolisms, he found a clear link: “If you double your energy intake,” he says, “you double your growth rate.” This strong correlation allowed him to chart the 21 dinosaurs on the same graph.

The animals fell right between cold-blooded animals and warm-blooded ones. “I was a little surprised to see dinosaurs in the middle,” Grady says. “If they’re not like reptiles and they’re not like mammals, then what the heck are they?”

Dinosaurs did match up with a few living animals — but not the ones he expected. T. rex and other dinos may have had metabolisms similar to those of great white sharks, tuna and leatherback sea turtles, Grady says. These animals eat more than typical cold-blooded fish and reptiles, but they don’t stick tightly to a set body temperature like warm-blooded birds and mammals.

Understanding dinosaurs’ metabolic quirks could offer new clues into other debated areas of the animals’ lives, such as how they hunted and why they grew so large, Grady says.

The results might be tough for people to digest, says paleontologist Luis Chiappe of the Natural History Museum of Los Angeles County. “Dinosaurs and tuna are so different,” he says. “It’s hard to envision comparing them.” But he agrees with the authors’ conclusions that dinosaurs occupied a happy medium between cold- and warm-blooded. “It’s going to ignite more research and open people’s minds,” he says.