A century after Albert Einstein rewrote our understanding of space and time, physicists have confirmed one of the most elusive predictions of his general theory of relativity. In another galaxy, a billion or so light-years away, two black holes collided, shaking the fabric of spacetime. Here on Earth, two giant detectors on opposite sides of the United States quivered as gravitational waves washed over them. After decades trying to directly detect the waves, the recently upgraded Laser Interferometer Gravitational-Wave Observatory, now known as Advanced LIGO, appears to have succeeded, ushering in a new era of astronomy.

What are gravitational waves?

Colossal cosmic collisions and stellar explosions can rattle spacetime itself. General relativity predicts that ripples in the fabric of spacetime radiate energy away from such catastrophes. The ripples are subtle; by the time they reach Earth, some compress spacetime by as little as one ten-thousandth the width of a proton.

How are they detected?

To spot a signal, LIGO uses a special mirror to split a beam of laser light and sends the beams down two 4-kilometer-long arms, at a 90 degree angle to each other. After ricocheting back and forth 400 times, turning each beam’s journey into a 1,600 kilometer round-trip, the light recombines near its source. 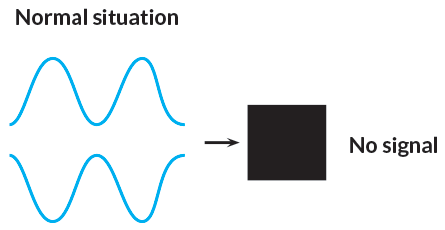 The experiment is designed so that, in normal conditions, the light waves cancel one another out when they recombine, sending no light signal to the nearby detector. 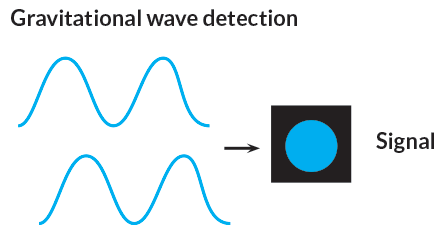 But a gravitational wave stretches one tube while squeezing the other, altering the distance the two beams travel relative to each other. Because of this difference in distance, the recombining waves are no longer perfectly aligned and therefore don’t cancel out. The detector picks up a faint glow, signaling a passing wave.

LIGO has one detector in Louisiana and another in Washington to ensure the wave is not a local phenomenon and to help locate its source.

What are other sources of gravitational waves?

By studying computer simulations of astrophysical phenomena, scientists can figure out what type of signals to expect from various gravitational wave sources.

A single spinning neutron star, the core left behind after a massive star explodes, can whip up spacetime at frequencies similar to those produced by colliding black holes.

Powerful explosions known as supernovas, triggered when a massive star dies, can shake up space and blast the cosmos with a burst of high-frequency gravitational waves.

Pairs of gargantuan black holes, more than a million times as massive as the sun and larger than the ones Advanced LIGO detected, radiate long, undulating waves. Though Advanced LIGO can’t detect waves at this frequency, scientists might spot them by looking for subtle variations in the steady beats of pulsars.

The Big Bang might have triggered universe-sized gravitational waves 13.8 billion years ago. These waves would have left an imprint on the first light released into the cosmos 380,000 years later, and could be seen today in the cosmic microwave background.

How else are we looking for gravitational waves?

LIGO isn’t the only game in town when it comes to hunting for gravitational waves. Here are a few other ongoing and future projects.

A couple of other detectors similar to LIGO are in Europe. The Virgo detector, near Pisa, Italy, is being upgraded and will team up with LIGO later this year. GEO600, near Hannover, Germany, has been the only interferometer running for the past several years while Virgo and LIGO underwent renovations. A third LIGO detector, this one in India, is scheduled to join the search in 2019.

In space no one can you hear you scream. Neither do you have to deal with pesky Earth-based phenomena like seismic tremors. Researchers have been lobbying the European Space Agency to put a LIGO-like detector in space — the Evolved Laser Interferometer Space Antenna — sometime in the 2030s. In anticipation of eLISA, ESA recently launched the LISA Pathfinder, a mission to test technologies needed for the full-fledged space-based gravitational wave detector.

To pick up the relatively low-frequency hum of colliding supermassive black holes, researchers are turning to pulsars. These rapidly spinning neutron stars (the cores left behind after a massive star explodes) send out steady pulses of radio waves. As a gravitational wave squeezes and stretches the space between Earth and a pulsar, the beat appears to quicken and diminish. Three projects — the Parkes Pulsar Timing Array in Australia, NANOGrav in North America and the European Pulsar Timing Array in Europe — are monitoring dozens of pulsars for tempo changes that can reveal not only single collisions but the cacophony of gargantuan black holes smashing together throughout the universe.

Gravitational waves released in the wake of the Big Bang would have left a mark on the cosmic microwave background, or CMB. This radiation fills the universe and is a relic from the moment light could first travel freely through the cosmos, about 380,000 years after its birth. The CMB preserved how space stretched and squeezed following a phenomenal expansion a trillionth of a trillionth of a trillionth of a second after the Big Bang. Many telescopes are searching for this signature by looking for specific patterns in how the CMB light waves align with one another. It’s not easy though; the BICEP2 project already mistook dust in the Milky Way for its cosmic quarry.

What can we learn from gravitational waves?

LIGO’s success is akin to Galileo turning his telescope toward the sky. Before that moment we knew little about the stars and planets. We didn’t realize there are other galaxies and had no concept of the immensity of the universe. Gravitational waves are a new way of seeing the cosmos. They are a striking confirmation of general relativity and will reveal cataclysmic explosions and collisions throughout the universe. But as with Galileo’s telescope, much of what gravitational waves can teach us is probably yet to be imagined.