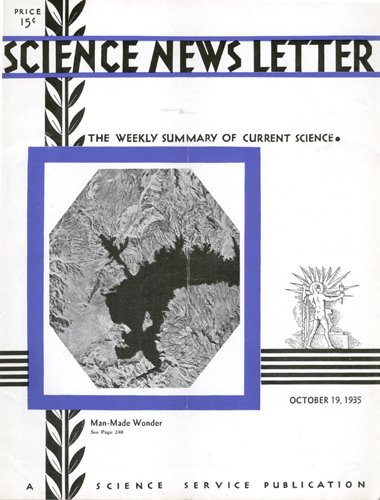 Through the 10 eyes of the Fairchild compound aerial camera, the territory about Boulder Dam and lake looks like a mass of interlocked and growing crystals.

The picture shown on the front cover of this week’s Science News Letter includes more than 200 square miles of territory, taken from a considerable altitude. The dam itself shows as a minute semicircle across the dark finger of water in the center foreground.

A test that shows the approach of lead poisoning before the disease has actually developed was reported by Drs. Carey P. McCord and F.R. Holden and Jan Johnston of the Industrial Health Conservancy Laboratories, Cincinnati, to the American Public Health Association.

The test is particularly valuable in protecting industrial workers who are exposed to lead in the course of their work. By means of the test, which is called the basophilic-aggregation test, the physician can tell whether or not lead poisoning is the early prospective lot of the individual being examined.