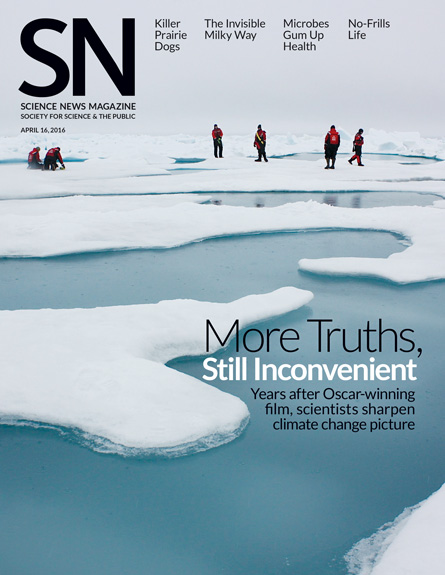 In “Changing Climate: 10 years after An Inconvenient Truth” (SN: 4/16/16, p. 22), Thomas Sumner reported on the progress scientists have made revising forecasts of the far-reaching effects of climate change — from extreme temperatures and sea level rise to severe drought and human conflict — in the decade since the Oscar-winning film’s release.

Reader response to the article was overwhelming, with hundreds of online comments. Some people enjoyed the in-depth look at climate change science, while others expressed skepticism about humans’ contribution to climate change and a general distrust of climate scientists.

“One of my goals for this article was to highlight that climate change research has itself changed over the last decade,” Sumner says. Scientists are still working to understand how the consequences of atmospheric warming will play out in the coming centuries. But one big message from the last decade of research is that the fundamentals have held up: Natural variability exists, says Sumner, but human activities are largely responsible for the current warming trend.

“The question now is what impact will human contributions have down the line and what should we do to prevent and mitigate those effects,” he says.

The Guy Fieri of frogs.

Sarah Schwartz wrote about the discovery of a microbe, Ideonella sakaiensis, that chows down on a hard-to-degrade polymer in “This microbe makes a meal of plastic” (SN: 4/16/16, p. 5).

Online commenters were amazed by this new plastic-gobbling organism. “This is great news,” Dan said. “Our world would be doomed if there wasn’t a microbe able to do this.” Chuckawobbly wondered how long it takes I. sakaiensis to digest the plastic. And Jean Harlow was concerned about the potential by-products of worldwide plastic digestion. “The waste product would be a significant amount … of what?” she asked.

Researchers observed that I. sakaiensis almost completely degraded a thin film of polyethylene terephthalate, or PET, after six weeks in a laboratory. But when extracted from the bacterium, the proteins used to break down plastic begin working in about 18 hours.

I. sakaiensisappears to break PET into smaller molecules, like amino acids and carbon dioxide, says coauthor Kenji Miyamoto of Keio University in Yokohama, Japan. But it would probably be hard for the microbe to break down plastic in the outdoors because of its specific growth requirements, he says. Miyamoto envisions that it could be possible to use the specialized proteins in a closed environment to break PET down into molecules such as terephthalic acid— one of the plastic’s main building blocks, which seems benign in the environment.

One reader had other ideas. Audrey Boag wondered if prairie dog moms kill ground squirrels to protect their pups from predation or from diseases carried by the squirrels. “In either case, minimizing the number of ground squirrels would pay in lifetime biological fitness,” she wrote.

“We never observed a ground squirrel kill or injure an adult or juvenile prairie dog,” says study coauthor John Hoogland. “Perhaps such attacks sometimes occur underground.” Hoogland notes that the majority of ground squirrels killed by prairie dogs were juveniles, which are too small to be a threat.