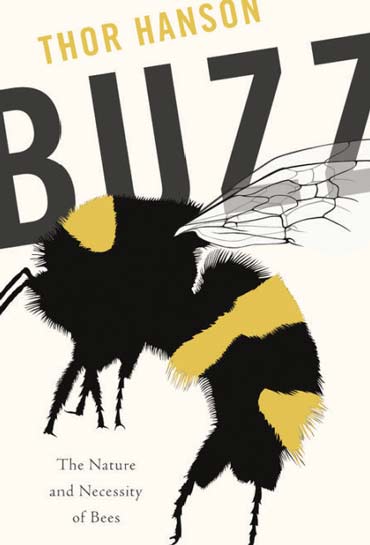 When you hear the word bee, the image that pops to mind is probably a honeybee. Maybe a bumblebee. But for conservation biologist Thor Hanson, author of the new book Buzz, the world is abuzz with thousands of kinds of bees, each as beautiful and intriguing as the flowers on which they land.

Speaking from his “raccoon shack” on San Juan Island in Washington — a backyard shed converted to an office and bee-watching space, and named for its previous inhabitants — Hanson shares what he’s learned about how bees helped drive human evolution, the amazing birds that lead people to honey, and what a Big Mac would look like without bees. The following conversation has been edited for length and clarity.

SN: This bee book is unusual — it isn’t mainly about honeybees. Why did you write about lesser-known bees?

Hanson: I made a deliberate decision because I thought the celebrity bees, the honeybees, would steal the show. It was high time to turn a stage light onto these 20,000 other species of bees, which have habits that are less familiar but just as fascinating. For example, most people think of hives when they think of bees, but actually most bees are solitary.

SN: You write that this book is an “exploration of how the very nature of bees makes them so utterly necessary.” So let’s cut to the chase: Why are bees necessary?

Hanson: First is the deep connection between bees and flowering plants. They’ve had a partnership from an early stage; each spurs the other in terms of diversity. It’s an incredible role that bees have played in shaping the natural world. They’re also important to our lifestyle, first for their role in the human diet. It’s often said that one of every three bites of food depends on bees.

But there are all these other connections that we don’t think about: Bees have provided light from beeswax candles and sweetness from honey. Early industrial uses of wax included making bronze sculptures with wax molds, batiks in Indonesia and wax tablets to write on.

You can trace our relationship with bees back not hundreds, but hundreds of thousands of years. The role of honey in the human diet goes back into prehistory. That source of sugar may have even helped fuel the expansion of our brain size. It may have helped us become who we are.

SN: One of the most astonishing examples of our relationship with bees has to do with a bird called the honeyguide. Tell me about that.

Hanson: Hunter-gatherers in Africa follow this bird to bees’ nests, and have for generations (SN: 8/20/16, p. 10). The honeyguide is very good at locating a hive. But on its own, it can’t access the nest. So once it locates one, the next thing it does is look for people. It hops around on branches and makes a piercing cry to get attention, then leads a person to the honey. People climb the tree or dig out the nest, and honeyguides feed on the remains.

What’s funny is how long it took biologists to figure out this relationship. The original explanation was that the honeyguide coevolved with the honey badger, which also raids nests for honey. Then a biologist pointed out that badgers are nocturnal, and the birds aren’t. Also, no one has ever seen a honeyguide leading a badger. It makes more sense that the relationship evolved on the savannah with people out looking for honey every day.

SN: One of the book’s most hilariously geeky moments is when you go to McDonald’s and pick apart a Big Mac. Why did you do that?

Hanson: I wanted to look for the significance of bees in an unexpected place. And you don’t think of bees when you go into McDonald’s — you just don’t! I didn’t care how much people stared. I sat there with my tweezers, pulling all the seeds off the bun. I ended up with one pile you could have without bees [meat and bun] and one you couldn’t [including not only the veggies, but also the cheese and special sauce]. We could still eat, but it would be pretty dull.

SN: You’re worried about bees. Why?

Hanson: It’s the four p’s: pesticides, pathogens, parasites and poor nutrition. Poor nutrition is one that people don’t think of. We ship honeybees all over the place, and they get force-fed almond blossoms for three weeks, then they’re packed onto trucks and shipped off to pollinate apples. It’s not a healthy lifestyle, and not a varied diet.

SN: You say that bees are one of the few insects that inspire fondness instead of fear. Why do you think that is?

Hanson: Bees have been with us from the beginning. Our primordial sweet tooth led us to follow these creatures, then we domesticated bees very early on, setting out hives and reusing good sites in baobab trees. I think we have a very deep connection to these creatures.

Buy Buzz: The Nature and Necessity of Bees from Amazon.com. Science News is a participant in the Amazon Services LLC Associates Program. Please see our FAQ for more details.