Scratching relieves an itch, sneezing clears out the nose and drinking relieves thirst. And yawning … does something.

Researchers have been trying to finish that sentence for centuries. This involuntary, obvious and sometimes contagious behavior afflicts most humans — even those still in the womb — multiple times a day. Yawning isn’t even restricted to people: Snakes, ostriches, hedgehogs and fish have been spotted throwing their mouths open for a satisfying yawn. Yet for a behavior so commonplace, the yawn is still a big, gaping mystery.

“Every single day, every person on the planet yawns,” says behavioral biologist Andrew Gallup of Princeton University. “Yet we have no idea why it is we do it.”

Actually, people have lots of ideas; the problem is that nobody has proposed one that everybody can agree with. New laboratory experiments are only fueling the debate, supporting some theories and contradicting others.

A full-fledged yawn is not restricted to the mouth. Carefully orchestrated pandiculations follow a routine: Lips part, the tongue hunkers down, and muscles in the face, mouth and diaphragm engage as the head tilts back. Air streams in. As the yawn reaches its peak, airflow halts briefly, eyes close, and muscles go rigid as they stretch. The long, slow exhale allows muscles to return to their normal positions.

Many researchers are convinced that this complex series of movements, which takes about six seconds on average, must somehow affect the body.

A yawn’s obvious gulp of air led many scientists to think that a yawn’s job was to replenish oxygen in the brain. So far, researchers haven’t found evidence supporting this suspicion. Yawning hasn’t been shown to wake up a groggy body or brain, either — a logical expectation, since yawns strike most frequently when a person is tired. Instead, new studies led by Gallup suggest, a yawn may be a thermo-stat, cooling an overheated brain, a position he argues in the January Neuroscience and Biobehavioral Reviews.

After a yawn, rats experienced a temperature drop in their brains, Gallup and his colleagues reported online last September in Frontiers in Evolutionary Neuroscience. Beginning about a minute before a yawn, thermometers embedded inside the rats’ skulls measured a brain temperature increase of about 0.1 degrees Celsius over the average temperature. Post-yawn, the temperature dropped until it reached its starting point.

In another set of tests, rats yawned more as the temperature rose and their brains heated up, Gallup and colleagues reported in the February Ethology. When the outside air got too warm, though, the rats yawned less, perhaps because this air was too hot to be helpful. Budgies, a type of parrot, also yawn more when it gets warmer. These results suggest that a big yawn acts as a radiator, bringing cooler blood from other parts of the body up to the brain, while flushing warmer blood down through the jugular vein, Gallup says.

But a yawn might simply happen at the same time as a brain temperature adjustment, says clinical neurologist Adrian Guggisberg of the University of Geneva. The same brain regions could control yawning and brain temperature changes, so that when one occurs, so does the other.

Whether the job of a yawn is to cool or not, it’s still true that a warm room can trigger a yawn. Other triggers are obvious to anyone who has suffered through a mind-numbing meeting. Boredom, drowsiness, hunger, stress and anxiety may also be yawn instigators. “All these things can trigger yawns,” Guggisberg says, “but then when you look at the actual effect of yawning, then you have more difficulties.”

Some researchers have suspected that yawning makes the brain more alert. Yet in human experiments, the brain’s electrical activity didn’t increase after a yawn, nor did heart rate or sweating, hallmarks of alertness.

With hard evidence lacking for any clear bodily function for yawns, Guggisberg and others have turned their attention to one of yawning’s most peculiar features — its contagiousness.

A yawn is powerfully catching, says neurologist Fatta Nahab of the University of Miami in Florida, who has studied what happens in people’s brains as they “catch” a yawn. “Here is something where, essentially, it doesn’t matter who your volunteer is, how old they are, how young they are,” he says. “There’s no training involved. You show them a yawn and you’re going to get a response back.”

This throat-jerk response may be governed by the prefrontal cortex, a part of the brain that becomes more active when people catch a yawn, Nahab and colleagues reported in Human Brain Mapping in 2009. Prefrontal lobes may repress the urge to yawn — until the brain detects one in someone else.

Nahab doesn’t think that neurons known to become active when a person watches someone else perform an action are required for contagious yawns. These “mirror neurons” aren’t any more active when people watch yawns than when watching nonyawn gapes. What’s more, infants are thought to have working mirror neurons, yet they can’t catch a yawn. “Babies can mimic facial movements, but they cannot mimic a yawn,” Nahab says.

Because a yawn is so contagious, Guggisberg and colleagues contend in the April Neuroscience and Biobehavioral Reviews, it probably carries a message. And not always a nice one. “The funny thing is that yawns are socially inappropriate in all cultures,” he says. “I think this is because people actually do understand the message: ‘Hey, I’m bored. Let’s change something.’ ”

Gallup interprets the shame of a yawn differently. To him, a stifled yawn “is an example of a lack of the communicative value,” he says. “It’s hard for me to believe that yawning can reliably transmit physiological or emotional state,” especially since it is often hidden.

Another argument against the idea that yawning sends a social message comes from spontaneous yawning, such as the yawn that strikes in the morning behind a closed bathroom door. Since no one is around to receive the message, it’s unlikely that communication is the objective of these solitary yawns, Gallup says.

Part of figuring out whether a yawn carries a message involves knowing who can get it. For humans (and perhaps chimpanzees), contagion doesn’t seem to kick in until around age 5. Infants and preschoolers don’t catch yawns, not even when the yawns come from their own mothers, Ailsa Millen and James R. Anderson of the University of Stirling in England report in an upcoming Biology Letters. The youngsters still yawn spontaneously, just not on command. People with schizophrenia and autism aren’t as susceptible to catching yawns as others, studies show.

Some scientists think that contagious yawning reflects empathy and social skills, something human babies and people with autism might not have developed.

To test the yawning-empathy link, researchers are looking for other animals that can catch yawns. In 2008, scientists made headlines with a study that suggested dogs can catch yawns from people, perhaps because dogs are supposed to be in tune with their human companions. Since then, two further studies did not find the same effect.

One of those newer studies tested dogs in their own homes and found that the canines didn’t seem to catch yawns from humans, even from their familiar owners.

The paper, published in the January Animal Behaviour, casts doubt on the idea of social yawning (and owner empathy) for dogs. “I’m afraid it’s not looking good for canines and contagious yawning,” says study coauthor Sean O’Hara of the University of Salford in England.

But evidence favoring empathy’s link to contagious yawns comes from a study in chimps. Viewing videos of familiar chimps yawning induced more contagious yawns than videos of yawning strangers, Matthew Campbell and Frans de Waal of the Yerkes National Primate Research Center at Emory University in Atlanta reported in April in PLoS One.

They suggest that contagious yawning might even serve as a measure of empathy.

Whether or not yawning in other species can explain why people do it, animals’ yawns have already helped solve one big mystery — the evolution of life itself. “Seeing a dog and horse and man yawn,” Charles Darwin wrote in his notebook in 1838, “makes me feel how much all animals are built on one structure.”

Anatomy of a yawn 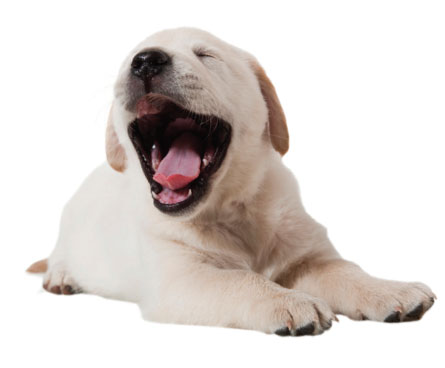 Whether in humans, dogs or other animals, the mechanics of yawning are the same. It begins with a slow, deep inhalation. The mouth and throat gape open; air streams in until the lungs are full. The yawn’s apex may bring a brief stillness, often accompanied by closed eyes and a stretch. As the yawn ends, air streams back out, the head, neck and diaphragm muscles return to their resting positions, and the mouth closes.