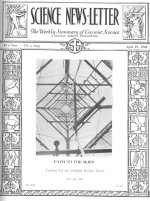 By the year 2050, Earth-dwellers will probably be able to travel to the moon and to communicate with their terrestrial home by telephoning over a beam of light. They will get there by traveling in a rocket ship at a speed of some 50,000 miles an hour, but far sooner, probably 1950, it is likely that a speed of 1,000 miles an hour will be possible.

This was the prediction made by Dr. John Q. Stewart, associate professor of astronomical physics at Princeton University and coauthor of a leading astronomical textbook.

Speaking before the Brooklyn Institute of Arts and Sciences, Dr. Stewart made what he called an “educated guess” about the future of rocket travel through interplanetary space.

The new member of the solar system discovered beyond Neptune may not be the ninth major planet predicted by the late Prof. Percival Lowell. Doubt was cast upon its planetary nature by computations made at the Lowell Observatory, where the remarkable solar system outpost was discovered.

Over a month ago the discovery of a faint heavenly object that seemed to conform to the expected orbit of the ninth planet thrilled the world. Now it seems possible that astronomers may eventually concede that the Lowell Observatory astronomers discovered not the expected major planet but a unique asteroid or an extraordinary comet-like object. Such a discovery will still be rated as one of the most important in the history of astronomy, perhaps even more important than if it really had been the planet for which the search was being made.

That “planet X” is not the Lowell planet is to be inferred from the data announced by Dr. V.M. Slipher, director of the Lowell Observatory. He did not discuss the implications of the values of the “preliminary orbit of planet X, which has been computed by the Lowell staff with the aide of Dr. John A. Miller, director of the Sproul Observatory” using positions of the object on Jan. 23, two days after it was first photographed, Feb. 23 and March 23.

The Lowell orbit computations give the eccentricity as 0.909, meaning that the object sweeps through space in a greatly elongated ellipse, far flatter than the orbit of any known planet and more like that of a comet. The object’s path is far more inclined to the plane of Earth’s orbit than any major planet, the calculated inclination being 17 degrees 21 minutes.

ANT GESTURES HAVE CHEMICAL CAUSE

When two ants meet and tell each other all about it, with excited gesturing and touching of forelegs and antennae, they are not talking in some precocious sign language. Their system of communication, which has puzzled and attracted psychologists, is traced to a chemical cause by T.C. Schneirla, of New York University.

Speaking before the New York Chapter of the American Psychological Association, he explained that he linked up ants’ nests and tubes so that one ant would be released into a chamber containing honey or meat or else containing some ants of an enemy tribe. When the ant returned from his pleasant encounter with food or from a less pleasant adventure into enemy country, he was brought face to face with an ant of his own community.

From the behavior of the two ants on these occasions, Mr. Schneirla concluded that chemical substances given off from food or from other ants cling to the body of an ant. When the ant meets a friend, they gesture and touch and the second ant senses the chemical substances. The more powerful and exciting the situation that has occurred, the more rapid are the motions of the communicating ants. But no differences could be detected in the timing or the sort of gestures, used in communicating good news or bad. Hence, Mr. Schneirla found no evidence to support the theory that ants have an “antennal language.”