Nerve cells in the brain don’t all work from the same genetic blueprint. Individual neurons within a person’s skull harbor over a thousand distinct DNA mutations, scientists report in the Oct. 2 Science.

The study “shows something fascinating — every neuron probably has a unique genome,” says neuroscientist Mike McConnell of the University of Virginia in Charlottesville. That variation may have important implications for how the brain grows and functions normally, and for when problems arise. “We’re no longer saying, ‘Do neurons have different genomes?’” McConnell says. “We’re saying, ‘Let’s figure out how that matters.’”

Molecular biologist Michael Lodato and neuroscientist Mollie Woodworth of Boston Children’s Hospital and Harvard Medical School and colleagues scrutinized 36 neurons taken from postmortem brains of three people. The researchers figured out the arrangement of the four molecular building blocks, called bases or nucleotides, that make up the cells’ DNA. Mutations were identified by looking for unexpected bases popping up in the sequence. Earlier studies had found individual neurons with changes in large chunks of DNA, but no one had carefully tallied up single base changes, called single nucleotide variants. “We didn’t know what the breadth and the characteristics and the dynamics of these mutations were in single cells,” Lodato says.

It turns out that the neurons were riddled with mutations — each cell had over 1,000 DNA changes, most of which were unique to that cell. “We were pretty surprised about the number we found,” Lodato says. The finding suggests that two neighboring neurons are probably operating from different genetic blueprints, Lodato says. 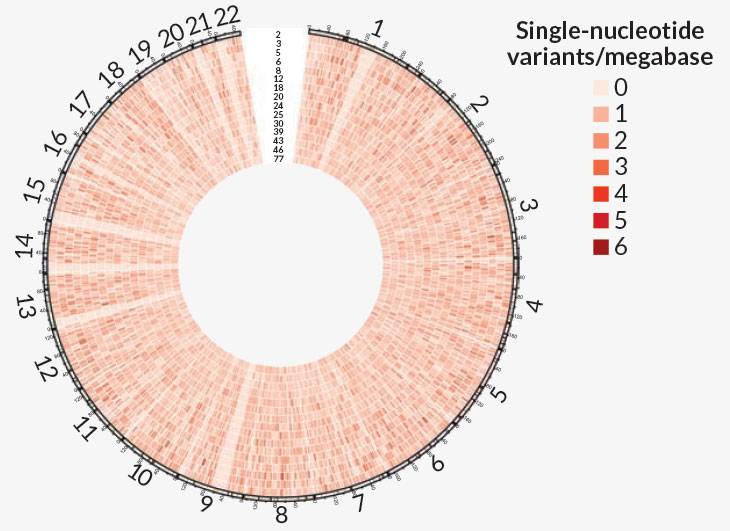 Mutations pervade the genomes of individual nerve cells from a 17-year-old male’s brain. Numbers inside the circle label the ring representing DNA from each single cell. Numbers outside the circle mark chromosomes, excluding X and Y chromosomes. The darker the color, the more mutations in that particular stretch of the genome.

That variety may turn out to have implications for how the brain — and the rest of the body — works, Woodworth says. “This idea that every cell in the body has the same genome is not true.”

Cancer cells and other cells in the body can rack up mutations as they divide. But most neurons in the brain don’t divide, suggesting that these cells get mutated in a different way. Neurons’ mutations seem to occur when the cells are making RNA and protein from its DNA. Genes that are busier in the brain had a higher risk of mutation, the team found. “It’s like everything, really,” Woodworth says. “Parts of your car that you use more heavily are more likely to wear out,” she says. “In a lot of ways, this is a story about entropy.”

The multitude of mutations found among neurons may have a role in brain disorders such as Alzheimer’s disease, schizophrenia and autism. In their experiments, the researchers turned up mutations that had been linked to schizophrenia and a seizure disorder, even though the neurons came from healthy people. It’s unclear how many of the neurons in the brain need to harbor harmful mutations before a disorder appears. But these genetic changes aren’t necessarily a bad thing: It’s possible that some amount of genetic diversity actually helps the brain operate, McConnell says.

The results also offer scientists a way to study how a human brain gets built, Woodworth says. This detailed description of individual cells’ genomes lets scientist trace the lineages of these cells all the way back to the embryo, offering clues about the assembly of vastly different parts of the brain. Much of what scientists know about that comes from studies on animals. This technique provides a way to do those experiments in people, Woodworth says.