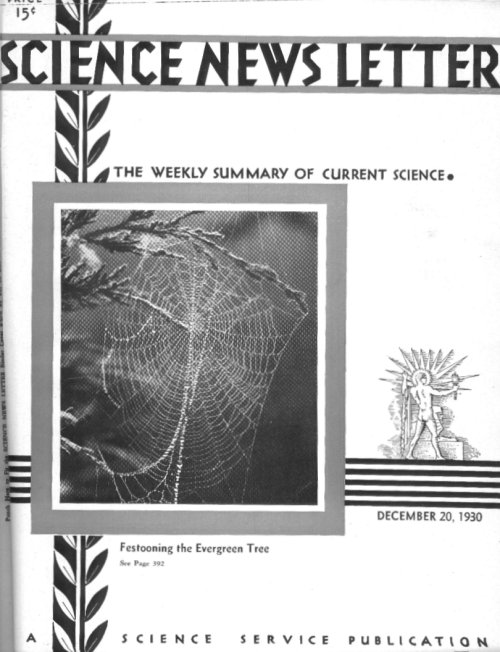 Christmas trees, with their exotic and ephemeral flowing of tinsel and bright paper, are apt to arouse in moralizing adults sentiments of vague regret that all this splendor is for a few hours only. Children, fortunately, are spared such thoughts: For them the hours of Christmas are long and glorious.

But even the tinsel and bright paper are solid and enduring compared with festoons that the Christmas tree may have worn when the year was younger. The cover picture of this issue of the Science News Letter shows superbly the bright but brief glory that belonged to a few twigs of one little tree, through the conspiracy of Arachne and Aurora. It is only a spider web beaded with big drops of dew, which the first half-hour of sun dispersed; but while it lasted, the tree wore a snare of silver threaded with pearls.

The planet Pluto, most distant known member of the solar system, is of approximately the same mass as Earth. Dr. Seth B. Nicholson and Nicholas U. Mayall, of the Mt. Wilson Observatory, have ascertained this fact by studying the way that Neptune, second most distant planet, is pulled out of its proper path by the Plutonian attraction. It was by a method similar to this that Neptune itself was discovered from its effect on the moon of Uranus.

Pluto was discovered last spring by astronomers at the Lowell Observatory in Arizona, but it turned out to be much fainter than had been expected. The new work shows that it is more similar to the inner, or minor, planets, Mercury, Venus, Earth, and Mars, than to its nearer neighbors, the major planets, Jupiter, Saturn, Uranus, and Neptune. According to Dr. Nicholson’s figures, Pluto is now about 3 billion miles from the Earth, but it is gradually coming a little closer.

As far as the largest present-day telescope can reach into space–a distance of 300 million times the 6 trillion miles that light will travel in a year–there are uniformly scattered a total of 30 million island galaxies. Each of these is a system of stars similar to the Milky Way system, of which the sun, and all the other stars that we can see, are part. Further, the space between them is perfectly transparent, at least as nearly as we can judge.

In a report to the Carnegie Institution of Washington, Dr. Edwin P. Hubble, of the Mt. Wilson Observatory, told of his latest researches in studying these objects, the most distant observed by astronomers.

On the average, he has found, the distance between neighboring nebulae or galaxies is about 1 million light-years. Many of them are arranged into clusters, but if large volumes are considered, their distribution is uniform. This was learned by a study of photographs made with three different telescopes, including the Mt. Wilson 100-inch, the world’s largest. With so many objects, they may all be assumed to be of the same brightness, and the photographs showed that when nebulae four times as faint were recorded, there were eight times as many. Because the faintness of a nebula varies not with the distance directly, but with its square, one that is four times as faint as another must be at twice the distance. Therefore, the number of nebulae varies with the cube of the distance, and this means that they are uniformly distributed.