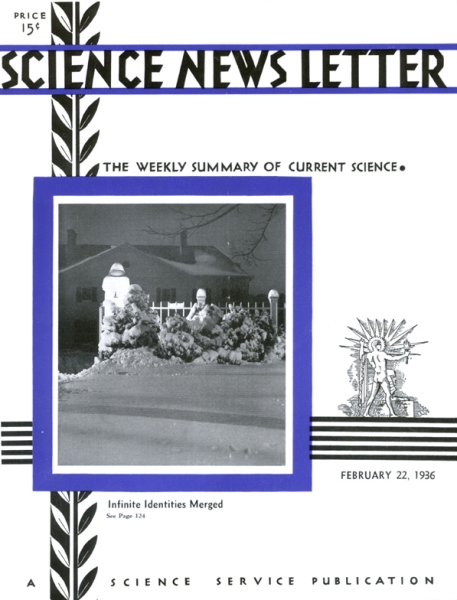 Snow has fallen over wide reaches of our country; deeper than it has lain for years it now lies from Washington to Maine, from the Canadian border to the Ohio. A cold wave of record-breaking length and intensity brought it and piled it up, and continued cold kept it from melting away. Lighter than feathers by the handful, in the aggregate it totals a tonnage that can be expressed only in figures of astronomical magnitude.

And if the total number of tons of snow is almost beyond calculating, what shall be said of the total number of flakes? Each so tiny that it can just be seen with the naked eye, so light that its weight will hardly disturb the most delicate of scientific balances, the numbers of these tiny white bits of frozen water, even on a square mile or an acre, let alone more than half a continent, simply baffle any attempt at imagining.

Yet it is highly probable that each separate flake that has fallen all winter, or in all past winters since the world has known snow at all, has been absolutely unique, wholly without an exact twin anywhere or at any time.

The cover photograph shows the unusually heavy fall in Washington as seen at night at the gate of the Japanese embassy by the camera of Fremont Davis, Science Service staff photographer.

MATTER IN CORES OF ATOMS FOUND TO BE CLOSELY PACKED

The nuclei or cores of atoms are composed of such dense matter that if the human fist were packed as tightly with matter it would weigh a million times a million tons, declared the Danish Nobel prize-winning scientist, Prof. Niels Bohr, at the University College lecture, London.

It is this close packing of the hearts of atoms that is proving puzzling to scientists, said Prof. Bohr, for the structure and behavior of atom nuclei are governed by laws quite different from those already known for atoms as a whole, or for familiar matter that can be seen or handled.

A possible explanation for the mysterious explosions of atoms that have been observed in studies of cosmic rays might be found, Prof. Bohr suggested, by the impact of particles having energy of perhaps 1,000 million volts. This is a hundred-fold multiplication over the mere 10 million volt energy particles available in laboratories. When the particle “bullets” can be produced having the much higher energy, atomic explosions may also be produced in the laboratory. That 1,000 million volt energy particles may be produced is not beyond distant hope, he said.

The nucleus, Prof. Bohr suggested, may be likened to a group of billiard balls lying on a circular table with low cushions. If some external ball is shot into the group there starts a series of mutual collisions that may cause the capture of the impinging ball. Such a capture explains the creation of the super heavy element No. 93 by the Italian physicist Dr. Enrico Fermi.

Another possibility, Prof. Bohr pointed out, is that if the balls keep colliding there is a possibility that one of them will collect enough energy to jump the barrier and go off the table. This situation could be likened to the experiments on artificial radioactivity performed first by the latest Nobel prize winners, Irene Curie Joliet and her husband, M. Joliot.