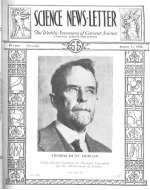 The American Association for the Advancement of Science has chosen Dr. Thomas Hunt Morgan to succeed the eminent physicist Dr. Robert Andrews Millikan as president. To many the name of Thomas Hunt Morgan is synonymous with the modern theory of the gene as the determining factor in heredity. Upon his observations is based the work of many other experimental biologists.

Did the early Indians on this continent know the great hairy mammoth, monstrous survivor of the Ice Age? Did they hunt him for his meat and hide and ivory?

Prof. William Duncan Strong of the University of Nebraska thinks it possible. Before the anthropological section of the American Association for the Advancement of Science, he told of evidence he has found in the myths of certain remote Algonkian tribes that seems to point that way.

The first was secured from the Naskapi Indians of northern Labrador. The Naskapi are an extremely isolated and conservative group who retain to the present time many primitive customs and beliefs. In the quite widespread Djakabish legend, the Naskapi version tells of a huge primal monster that destroyed the parents of the hero.

For demonstrating that atoms act like waves of light and thus strengthening the experimental proof of the new kind of physics known as wave mechanics, Prof. A.J. Dempster of the University of Chicago was awarded the $1,000 prize of the American Association for the Advancement of Science for a noteworthy contribution to science presented during the annual science meetings.

It was once believed that matter and radiation, such as light, had different kinds of properties, but de Broglie’s wave mechanics predicted that small particles of matter should behave like waves of light in many respects. This revolutionary idea was first given experimental support by Dr. C.J. Davisson and L.H. Germer, New York physicists, about two years ago when they showed that electrons, particles of electricity and the most minute matter, are deflected from a crystal of nickel as though they were waves instead of particles. Dr. Davisson was honored with a National Academy of Sciences gold medal for his research.

Now Prof. Dempster in his prize paper delivered before the American Physical Society showed that atoms, larger particles of matter than electrons, also act like waves when they are deflected from a crystal in much the same way that sunlight is reflected from a finely ruled diffraction grating, to make a glorious rainbow. A firmer foundation is provided for the new ideas of the constitution of matter.