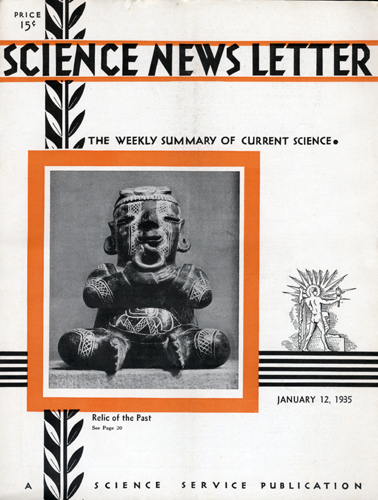 RELIC OF THE PAST

Among the exhibits of Mayan pottery from Guatemala was the little figurine shown on the front cover of this week’s Science News Letter. This figure has the interesting device of a slit in the back of the head letting the light show through the eyes. As you walk past the figure, this spot of light appears to move, thus giving the effect of moving eyes following you.

Celestial twins, a pair of giant suns revolving round and round each other millions upon millions of miles out in space, are revealing to astronomers secrets of star composition never before known for any other stellar object in the whole universe outside of our own sun.

How scientists found that these distant stars contain such common elements as aluminum, iron, nickel, and hydrogen was disclosed to the astronomical section of the American Association for the Advancement of Science.

For the first time, the public were given an opportunity to see the exact locations of genes, the submicroscopic units that determine the course of heredity, when the annual exhibit of the Carnegie Institution of Washington opened.

Powerful microscopes carried slides mounting specially prepared cells showing recently discovered detailed structures in their chromosomes. The positions of the genes are correlated with these bandlike markings. Enlarged diagrammatic charts show the positions of certain known genes and tell the particular influence of each. Finally, a collection of “yeast flies,” the tiny insects used in the experiments, show the particular heredity effects that follow the loss or displacement of some particular gene.